Español
Home/Episode Recap – Shenmue The Animation S01E07: Future
Back to the newsfeed It was a hunt for the second Wude in this week’s episode, titled Future. Here’s the recap. This episode picks up right where Dignified left off, continuing the reveal of Master Lishao Tao’s identity as the stoic woman he met last week: Xiuying Hong. Reading his shock, she verbalizes his internal doubts that a woman could be a master and would never win a fight against him. Despite Ryo’s hesitancy to fight a member of the opposite sex, he agrees to a sparring match with Xiuying, allowing her to demonstrate the martial prowess that earned her the title of master. The pair assume fighting stances and Ryo charges, only to see his barrage of attacks easily avoided as the lightning fast Xiuying dances around him. He attempts to pull out his latest ace in the hole move, Guizhang’s Swallow Dive, and again only manages to hit air as Xiuying grabs off-balance and forces him to his knees. Holding a finger to a pressure point behind Ryo’s ear, Xiuying remarks that he would already be dead if she wished it before releasing him to end the match. The gifted master has no help to offer the headstrong young man on his quest and tells him so as she walks away, urging him to return home. 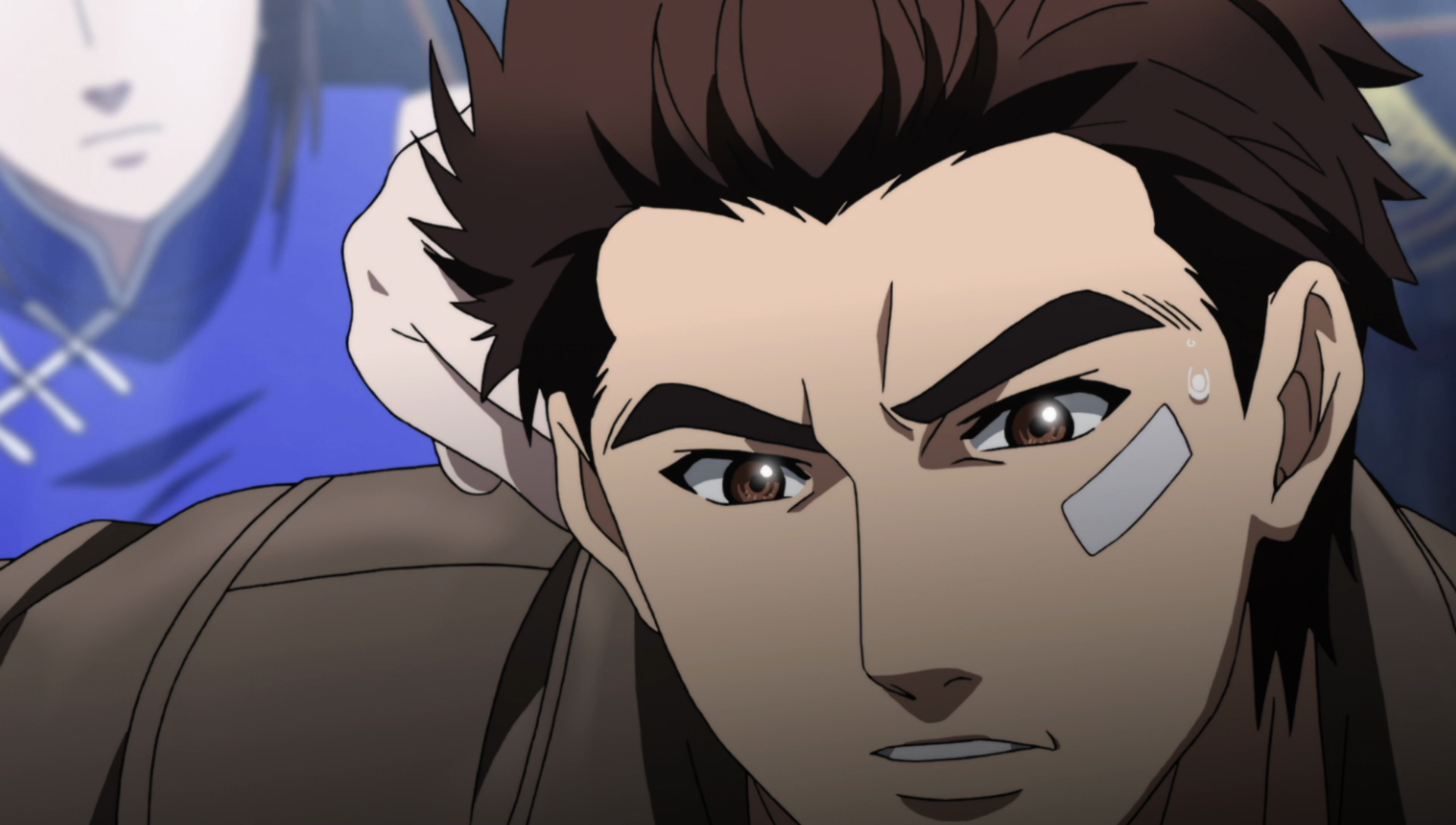 On the way out, Ryo is greeted in the temple courtyard by an upbeat young girl letting him know he never stood a chance against Xiuying, before a scolding is received for slacking off on her chores. Fans of Shenmue 2 will be happy to see the familiar face of Fangmei making her first appearance in the series. Before running back to finish her work, Fangmei says she’ll see Ryo around, though he believes he’s now at a dead end with Lishao Tao and won’t be returning. The temple monk, Hanhui, advises him to learn the remaining 3 Wude in hopes of softening Xiuying’s stance to helping him find Yuanda Zhu. He directs Ryo to visit Guang Martial Arts School. Asking why the monk is helping him, Hanhui says it isn’t for his sake, implying hopes that Ryo’s quest can help his master come to terms with something bothering her. Following a formal welcome at sword-point, Ryo is invited into Guang Martial Arts School as a visitor to meet with Master Zhoushan, the school’s leader. Hearing that Ryo needs to learn the Wude to better understand Lishao Tao’s teachings, Zhoushan regretfully states he is unable to speak of them. He believes himself to have ruined another man’s life and therefore is unworthy to share knowledge of these precious teachings. Ryo leaves the school empty handed for now.

Joy happens upon Ryo being himself, asking random strangers on the street for guidance finding skilled martial artists. Joy doesn’t know any but does offer to show him around town, only to find her overture rebuked in typical tunnel-vision Ryo Hazuki fashion. While peeved at the shock of rejection, she does let him know she heard about a street performer that took down a band of thugs at a local mall. Ryo heads there and finds a man laying on the ground who instructs him to get him a beer if he wants to talk. The disheveled man takes a swig with an expression of glee that anime fans will find reminiscent of Evangelion’s Misato Katsuragi, before beginning the day’s performance by calling a crowd over to watch Ryo break a rock with a Karate chop. The rock is indeed broken by Ryo, which surprises the street performer introducing himself a Zongquan. He’d like to team up and take his performances to the next level, but the offer is declined as Ryo reveals he’s there in hopes of learning the Wude. Zongquan also turns down the request, stating himself to be unworthy, which Ryo notes is also what Master Zhoushan said. Hearing of the Guang school’s honorable Master Zhoushan, the street performer becomes visibly upset and rushes off, implying he knows the elderly instructor. Ryo returns to the school to ask Zhoushan about his relationship with Zongquan and learns he is a banished former pupil. He was the school’s most talented student, but lost his path and began using the martial arts as means to show off. Zhoushan is distressed that to this day he is continuing to defile he martial arts by using them in his performances, taking full blame upon himself for failing to guide Zongquan properly. This shame is why the master is unable to teach Wude. Ryo must take action to help fix this situation if that stance is to change. He returns to Golden Shopping Mall and is intercepted by a gang calling themselves the Yellow Heads, also searching for Zongquan. 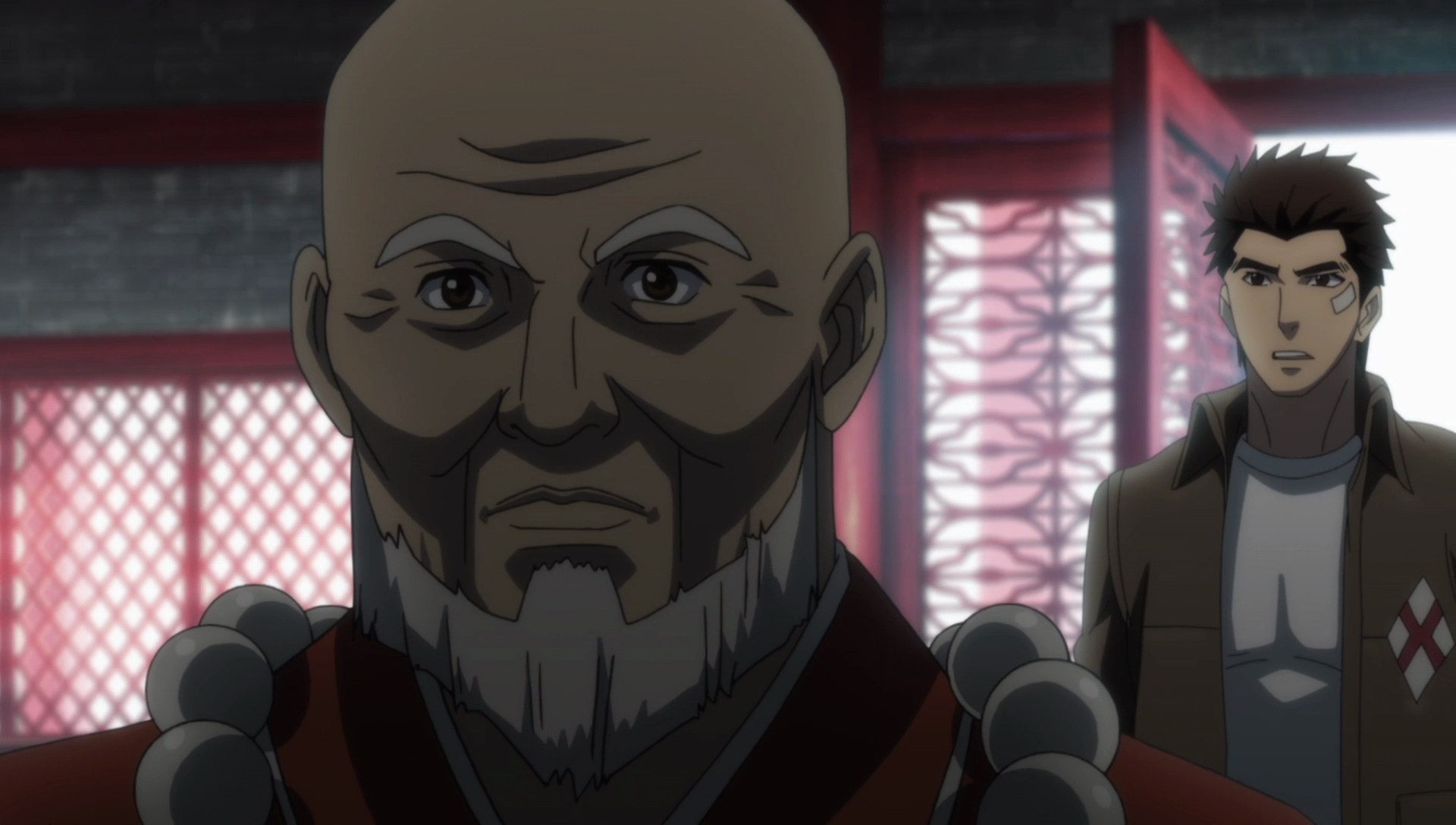 The gang members want either Zongquan’s location or his “protection” money from Ryo, both of which are refused and a fight breaks out. Ryo gets to use the Iron Palm technique he learned last episode to inflict major pain on one of the thugs, another nice call back to the moves he’s learned this season. As the fight continues, Zongquan returns and intervenes to break it up and get the two of them to safety. He doesn’t want to fight the gang members if he can avoid it, which confuses Ryo who sees the thugs as lesser fighters. Running down the streets of Hong Kong, the pair rush past Ren, the Heavens gang leader out looking for Ryo after inquiring to Joy about his whereabouts. It seems these two are set up to finally have their first encounter next week. Meanwhile, a reminiscing Xiuying is approached by Fangmei who lets her master know she cleaned up her apartment room.

At Pigeon Park, Ryo and Zongquan discuss the Yellow Head gang and why they harass him before turning the focus back to Master Zhousan. The street performer is expecting to hear his old master thinks him a failure and brushes off the idea that the elderly instructor should see himself as at fault for Zongquan’s failures. Later, Ryo returns to the Come Over Guest House for the evening and gets informed that Joy’s preferred guest status will only carry him so far. He’ll need to start paying to sleep there starting tomorrow. Ryo is low on funds, so that’s going to be a problem for him. A Night on the Town

A persistent Joy shows up at the guest house and invites Ryo to dinner. As they talk about his encounter with the Yellow Heads, she lays her interest on thick, letting him know he can’t seem to hide how extraordinary he is and attract attention to himself, positive or negative. She mentions that a cat doesn’t always need to bare their claws regarding his encounters with gangs, which triggers a sudden understanding of why Zongquan had been reluctant to engage the Yellow Heads earlier. He abruptly runs off, ending his dinner with Joy, who remarks that no men in Hong Kong ever try hitting on her. Ren used this line with her while they were conversing earlier in the episode. Like Nozomi before, Joy is finding herself having a hard time getting Ryo to return some of her interest. Back at the mall, a group of Yellow Heads have cornered Zongquan and he has no choice but to fight them. A few amateur hour goons go down easy, when the leader decides to step in. Ryo shows up and begs Zongquan to call off the fight. He wants him to remain true to the virtues he’s shown of not making a spectacle of martial arts in choosing to avoid brawls with the Yellow Heads. There’s still a part of him that wishes to live up to the humility required of a true martial artist. A gang member interrupts and rushes with a weapon to get laid out by a stack of books, but Zongquan humorously assures that was just a bit of horsing around before the Yellow Heads stagger away, defeated for now.

Zongquan gives Ryo a letter to take to his old master. Returning to Guang School the next day to deliver it, Master Zhousan is relieved to see that Zongquan writes the ways of the martial artist still enchant his hands, even now that he has parted ways with his old master. He writes of the spirit of JIE, the second Wude. JIE means to keep ones heart free of conceit and never use force blindly or flaunt technique, which Zhoushan can now share with Ryo. Through his actions, Ryo has allowed elder master and street performer to cast away their shame and devote themselves once more to the true study of martial arts. Ryo returns to Man Mo Temple to share his newfound knowledge of JIE with Xiuying and asks if his ignorance of the second Wude was keeping her from helping him. She replies it was not the only reason and she will not be changing her mind about providing assistance. Ryo grittily proclaims he will not give up until she has changed her mind. His words trigger a childhood memory of a young man saying the same to her, that he will not give up. This memory appears to be what’s holding her back from helping Ryo. 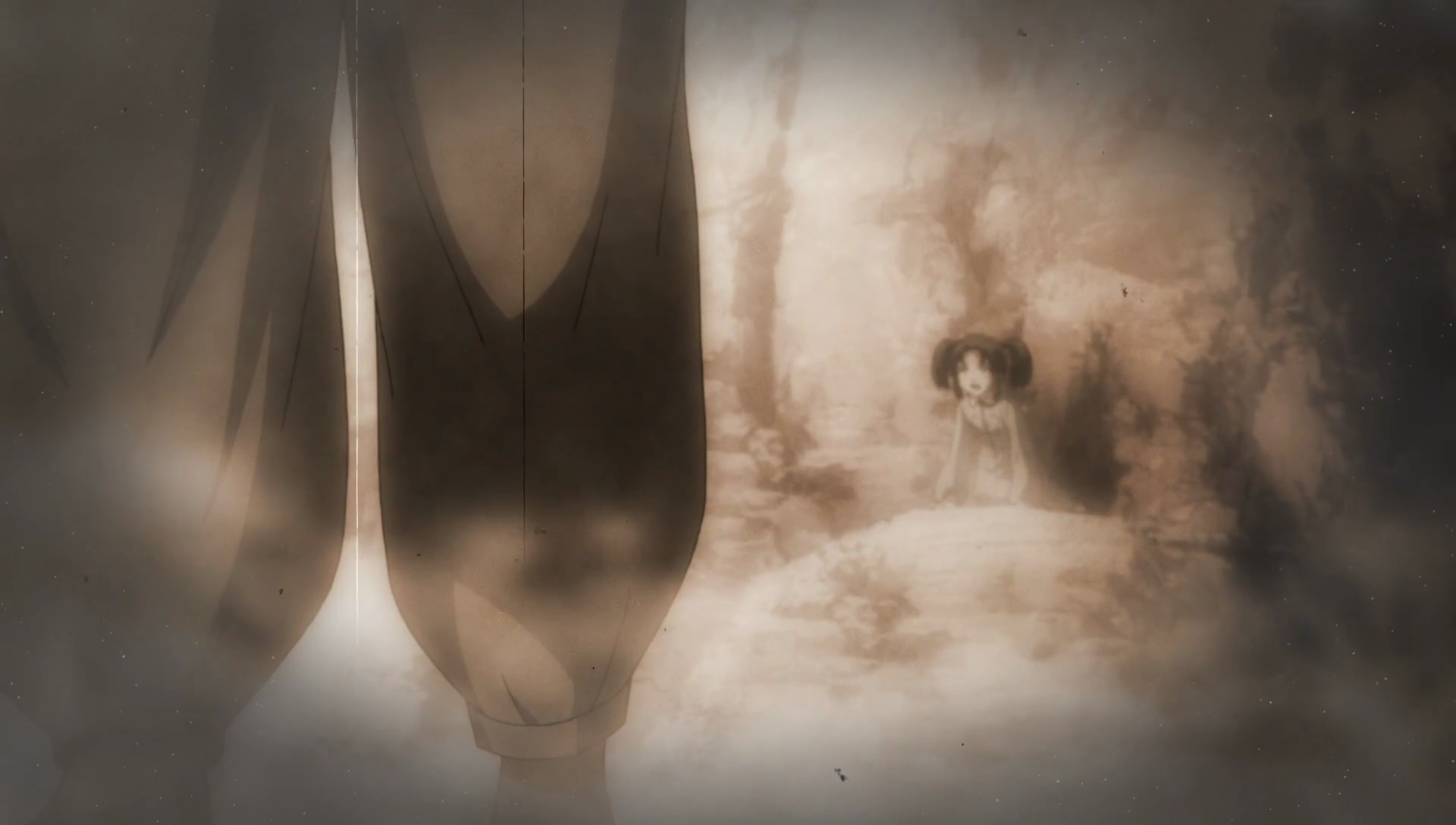 Comparison to the Game Series

Spoilers for Shenmue 2 in this section.

Ryo’s response to Xiuying as Master Tao: There’s a slight difference in the way Ryo responds to Xiuying after being invited to spar against her. Anime Ryo suggests he prefers not to fight with women, while game Ryo loudly proclaims his refusal until she attacks on her own to start the match.

Zongquan and Zhoushan: The story of the street performer and his master were the centerpiece of this episode and their plot was hugely expanded. While it played out similar in the end, the games saw Ryo get the letter from Zongquan to take to Master Zhoushan immediately after breaking the rock. Everything else we saw in the episode was bonus material exclusive to the show.

Dinner with Joy: Ryo can find Joy at multiple locations during the Hong Kong segment of Shenmue 2, including Pine Game Arcade and the Aberdeen warehouse district, but never got to sit down with her for dinner. It was a cool bonus scene to see this additional interaction with her.

Establishing the Yellow Heads: Ryo does encounter them during the Hong Kong section of Shenmue 2, but the anime is taking special care to spell out their heavy influence in the city earlier. Harassment of Zongquan to extract protection money was an example of their presence being felt in a way it wasn’t in the games.

This episode was essentially dedicated to learning just one of the Wude, which represents a slow down in the storytelling pace we’ve grown accustomed to so far. I appreciated allowing the narrative to breath a little bit and get those extra scenes with characters we couldn’t in the games.

I came away from this episode with a better appreciation for Zongquan’s character, who frankly could be easily forgotten after you visit the mall and break the rock in Shenmue 2. The anime continues to enrich certain side characters that saw limited screen time in the games. Fangmei’s introduction was well done and you can tell the animators were having fun creating her various expressions. I also liked that Joy continues to get good scenes and her importance in pushing Ryo’s journey forward can be strongly felt.

I expect this more methodical pace to continue over the next week or so as the remaining two Wude are sought before picking the action back up. I’m excited to see what they can do with some additional side characters that will be bursting onto the scene next week. That episode is titled Aspiration. See you then for the recap!