Español
Home/Episode Recap – Shenmue the Animation S01E04: Shackles
Back to the newsfeed 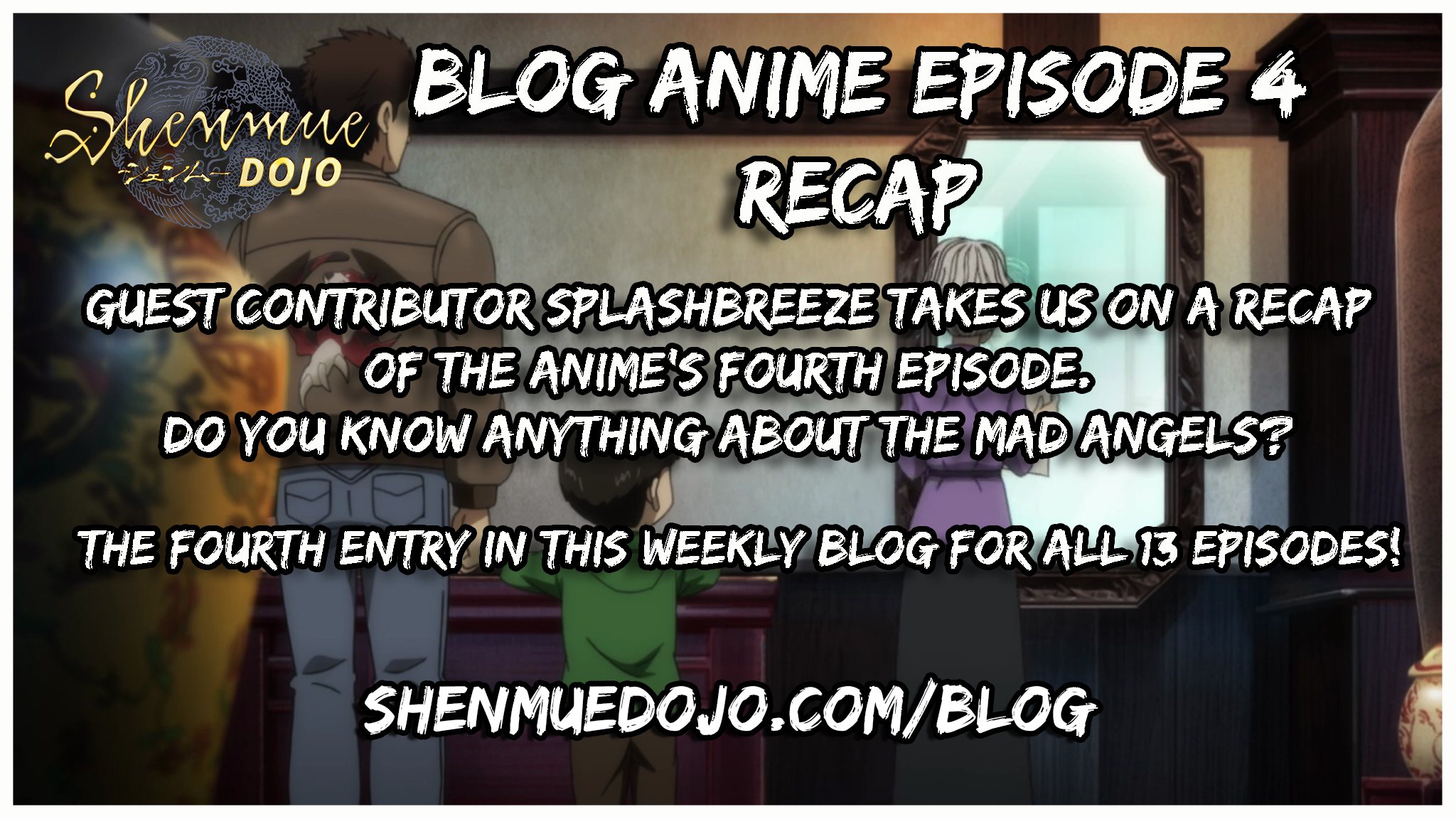 This week we boarded our forklifts for episode 4, titled Shackles. 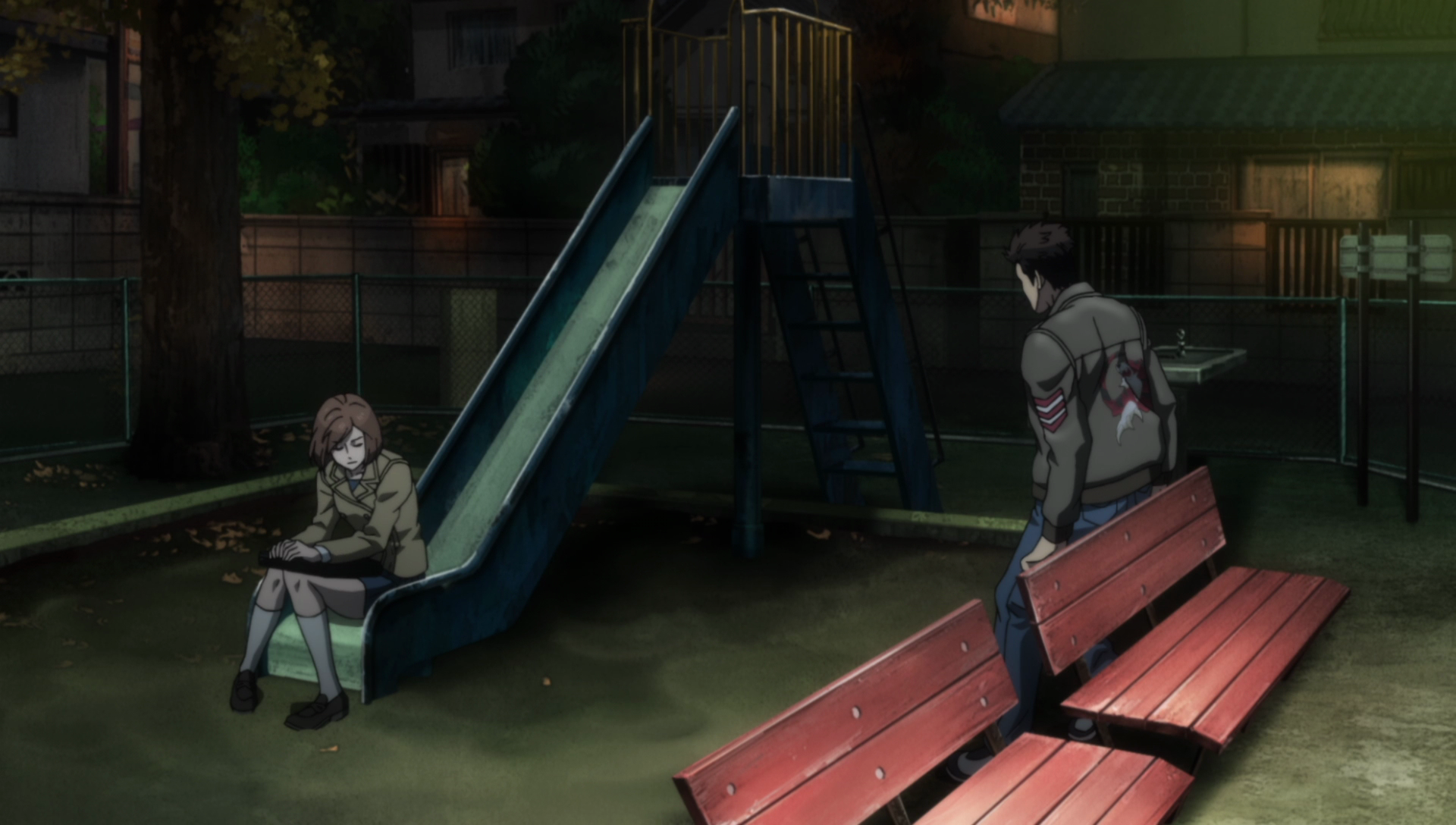 As with Daybreak we open to another of Ryo’s nightmares. This sequence will look very familiar to anyone that wasted too many days in Shenmue 2. Lan Di is present once more, but this time a mysterious Chinese girl Ryo has never met is present too, stalked by the cartel leader. Once again Ryo wakes from this vision in a cold sweat, just as the immediate danger to the girl is made evident. This dream sequence would serve as the only appearance for Shenhua in this jam-packed episode focused on the drama building in Yokosuka between Ryo and the Mad Angels gang. 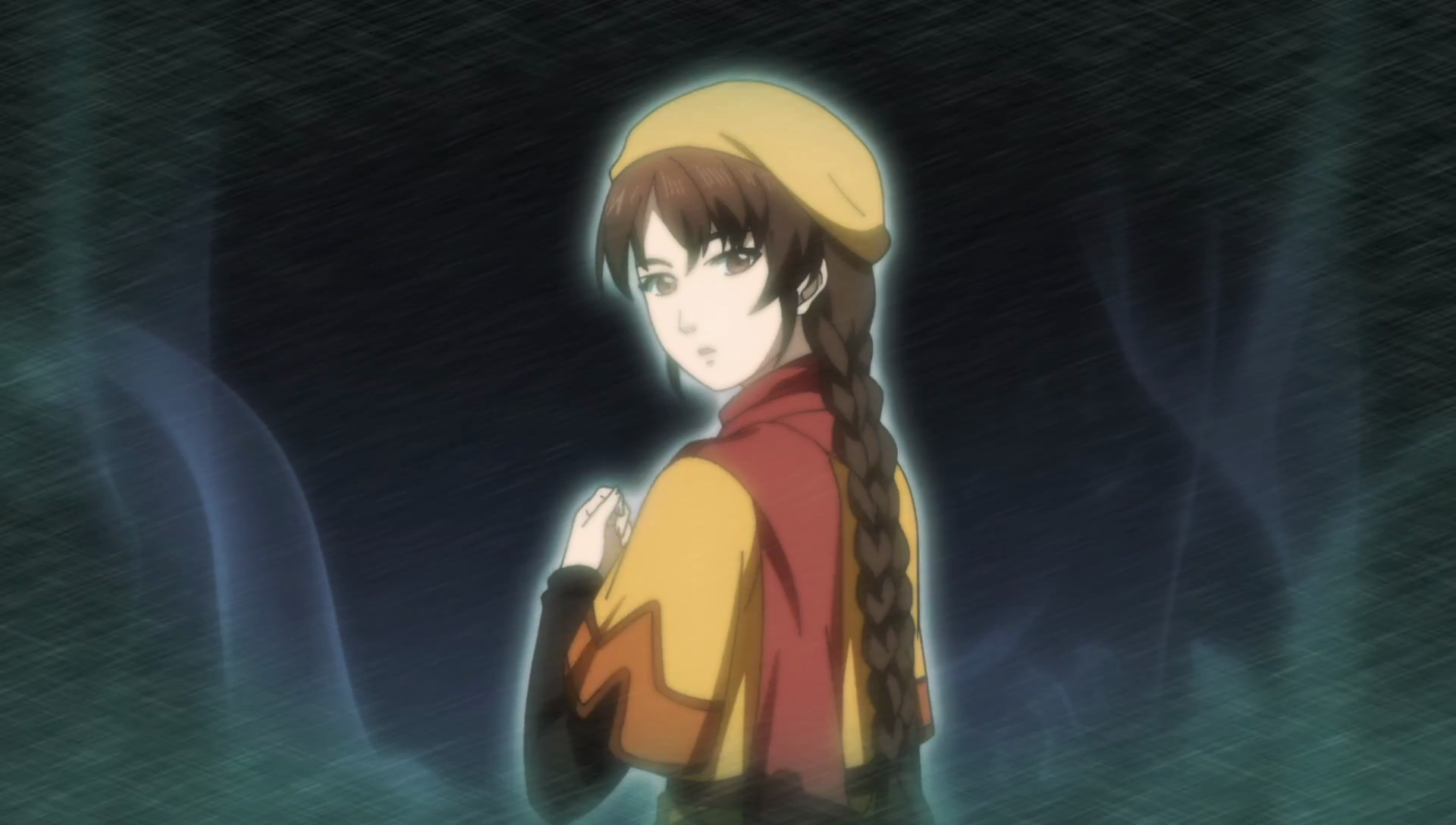 In a travel agency, Ryo is shopping trips to Hong Kong and needs to raise 150,000 yen to afford the flight. The show slyly confirms Ryo can understand Mandarin, which he’ll need for his trip to China when the agent greets him in this language before realizing he is Japanese. He considers asking Ine-san for the money but backs off the idea when seeing how tight things are watching her balance the books. Fuku-san comes to the rescue handing over his literal piggy bank to help, but even with this Ryo is still short funds. He needs a job. 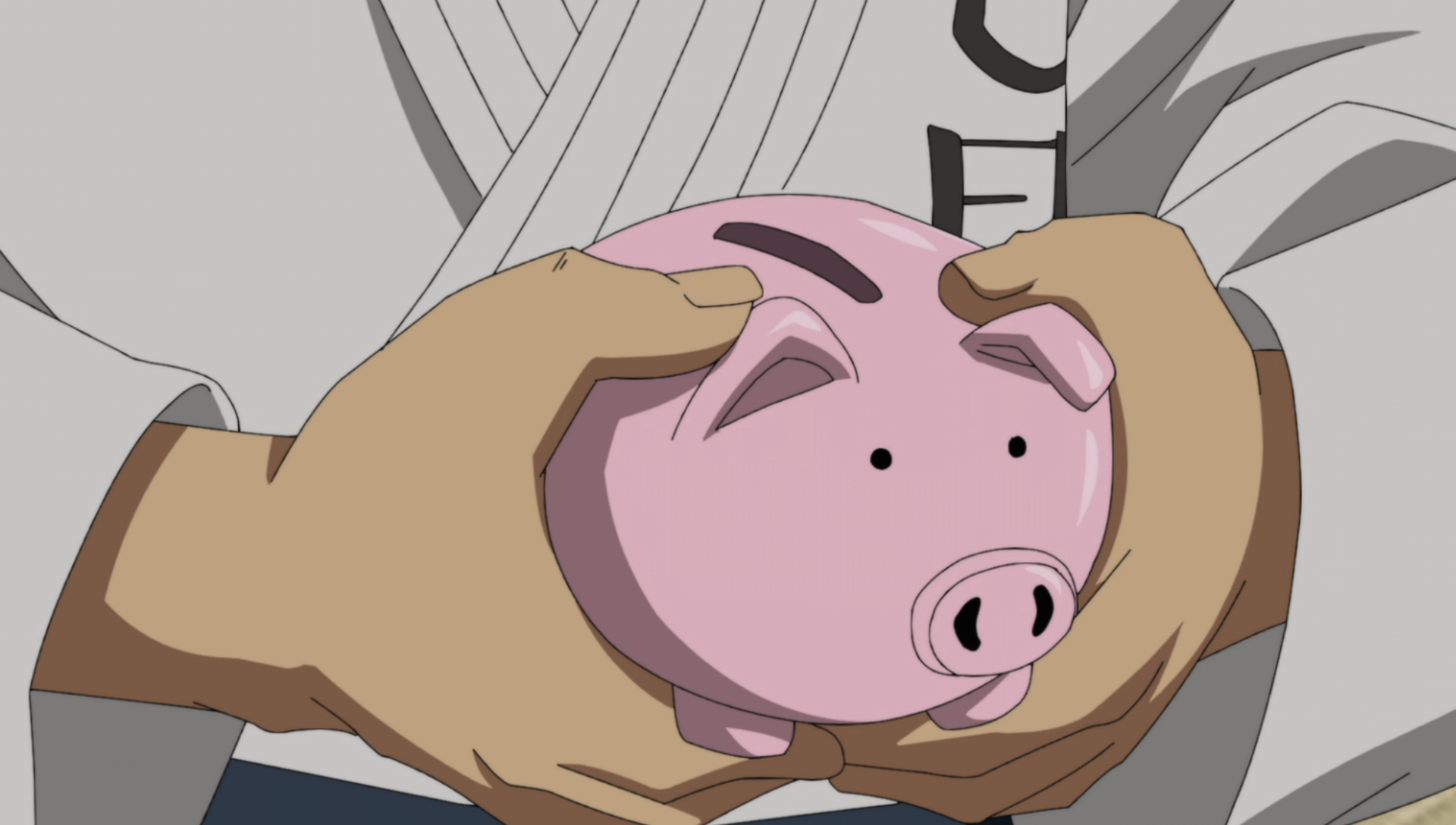 Heading to the harbor in hopes of finding part time work. Goro intercepts Ryo and has decided that, being connected to Master Chen’s organization, Ryo is a big-shot to be respected and offers his bro help finding work. This comes in the form of a forklift operator position with Alpha Trading Company after getting a tip from Mai in the lunchroom. Ryo’s new boss introduces him to Mark Kimberly, a stoic fellow operator. Tasked with training the new employee, Mark teaches Ryo the absolute basics this coldly leaves him to sink or swim on his own. Concluding an error filled work day as Ryo struggles to get the hang of his assignment. Goro shows Ryo around the harbor after work in another goodwill gesture. 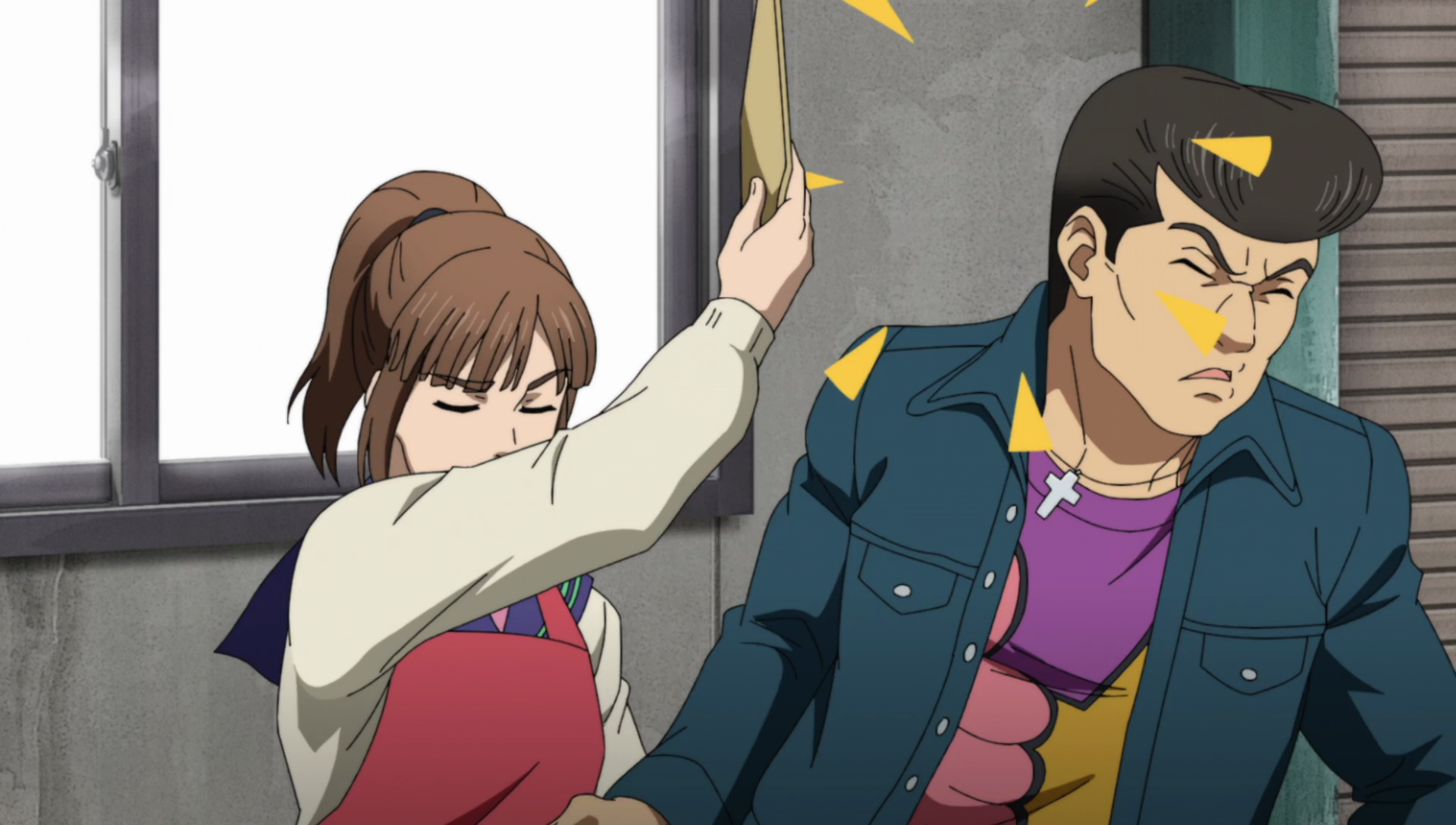 A day later, Nozomi is still worried about Ryo not showing up for school and visits his home, where Fuku-san informs her that he’s taken on work at the harbor. She waits for him to return home. As the second work day wraps, Goro shows up and we finally find out why he’s had such a change of heart about Ryo. His own father left their family when Goro was young and he always wanted to find him but never had the courage. Like Guizhang, Goro is inspired by Ryo’s determination and wants to help him in his quest. Ryo asks Goro to take him to the Mad Angels but this is a step too far for Goro and he has to decline.

Mark overhears the story of Iwao’s murder along with the Mad Angels involvement and has a change of heart about him. He starts helping a confused Ryo correct his errors on the forklift. Meanwhile, the Mad Angels leader Terry hears the guy that took down Charlie is now working on their turf. Seeing this as the last straw, he sends his gangsters to find Ryo.

Heading home, Ryo is again intercepted this week by Guizhang. The younger Chen is conflicted about orders from his father to stop tailing Ryo following his discovery of the Phoenix Mirror, not wanting to escalate tensions with the Chi You Men any further. While this was Guizhang’s take on the matter last week, Ryo’s determination to better know his father has changed his mind and he now wishes to help in a small way. Ryo is attacked again in another martial test. While he fares better against Guizhang’s initial rush, Ryo is again overwhelmed and leaves an opening for his signature Chen-style attack, the Swallow Dive. Guizhang teaches this move to Ryo and lets him know that if his father had been the one murdered, he would also follow the killer’s trail.

Nozomi and Ryo head to the park for a talk after meeting up outside the Hazuki residence, where Ryo apologizes for causing her concern. Rather than express her feelings for him as she did here in Shenmue 1, she instead encourages him to continue his investigation if that’s what he feels is right. Nozomi continues to be a pillar of support for Ryo. 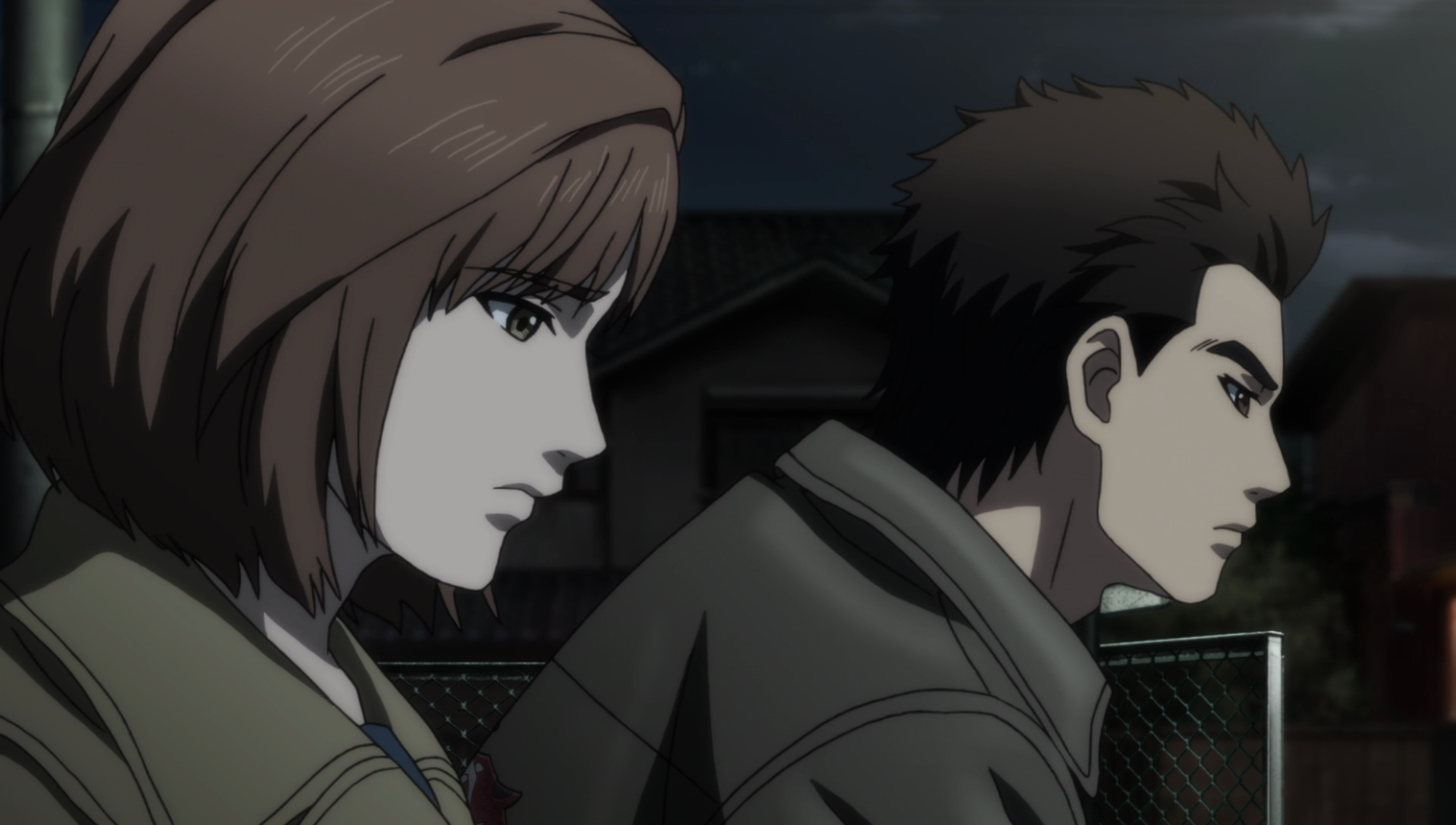 At home, Nozomi’s grandmother asks if she’ll be taking her parents up on their request for her to move to Canada with them. Her grandmother believes she should go and a conflicted Nozomi appears close to accepting the offer. The next day, Goro and Mai show up to Aida Flowers and the greaser lets slip that Ryo is chasing after the Mad Angels, an encounter he’s unlikely to survive.

At the same time, Mark is assaulted by gang members demanding the location of the Hazuki boy, which he refuses to reveal. Ryo lands on the scene and gives these punks a beating they won’t soon forget. Still confused by the sudden kindness toward him, Mark reveals that he too is searching for a family member, his brother, who got involved with the Mad Angels. He changed his mind about Ryo after realizing his quest reminds Mark of his own. 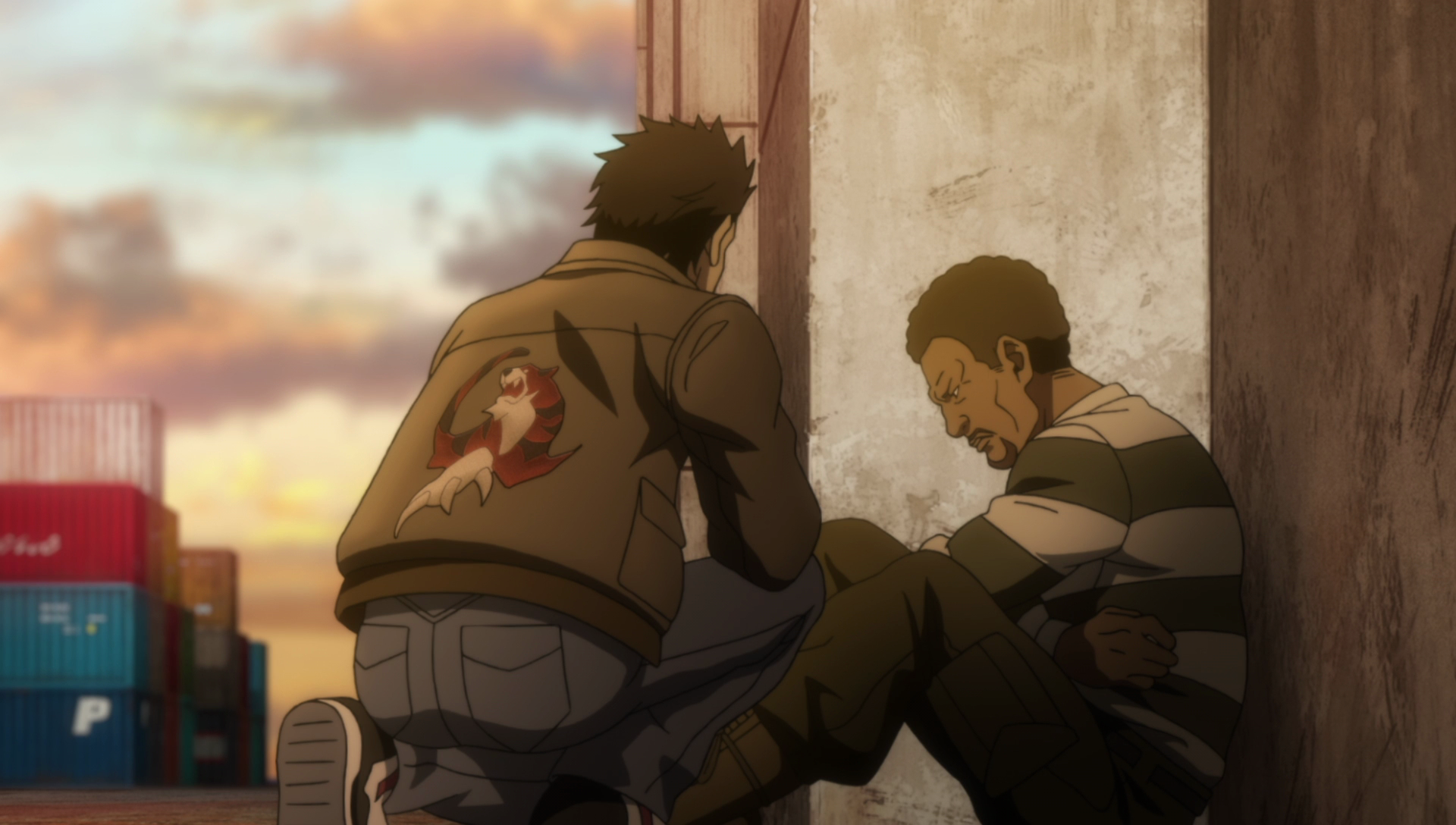 Fearing for Ryo, Nozomi takes matters into her own hands and tries to dig up information from Saijo at Bar Yokosuka on a flower delivery. The bartender is unwilling to put Nozomi in danger and advises her to stay away from them. Not content to sit on the sidelines, Nozomi bravely puts herself right in the middle of the action. She tails a Mad Angels member that just left the bar to their hideout but is quickly discovered and taken captive.

With the leverage they need, Terry dispatches a gang member to the Hazuki residence demanding he show up to Warehouse 17 or they will ‘make Nozomi cry’. An enraged Ryo knocks the overconfident biker right of his motorcycle with a well placed kick. Ryo rushes to Warehouse 17 to confront the Mad Angels and save Nozomi. A deal is struck. Ryo must take down Guizhang before she will be released to prove he has no loyalty to the Chen family and his fight truly is with Lan Di. 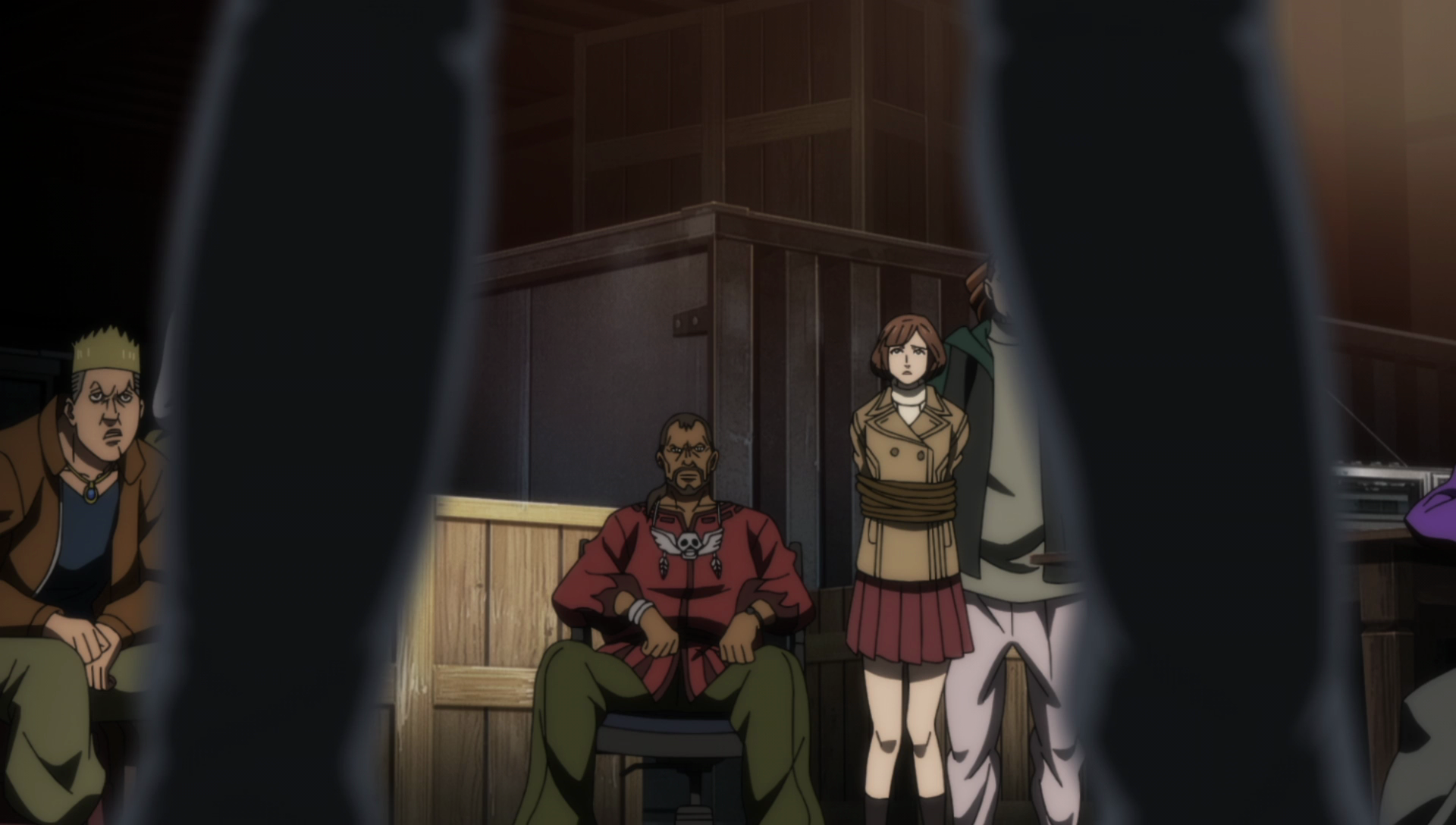 When Goro was touring Ryo around the harbor, he explained workers chalk mark the ground with the number of whichever warehouse is empty that day to gather at after work. Ryo marks the ground with a ‘17’ as a signal to head there. Who will show up at the Mad Angels’ warehouse? We’ll find out next week.

Ryo is now forced to confront Guizhang as he walks home from work. The two engage in a gorgeously animated fight sequence. Each combatant hits the other with the Swallow Dive and both collapse to the ground. Seeing his roadblocks to Yokosuka dominance laying lifeless before him, Terry ecstatically proclaims the city will now belong to him. We leave this episode on a cliffhanger to be resolved next week. 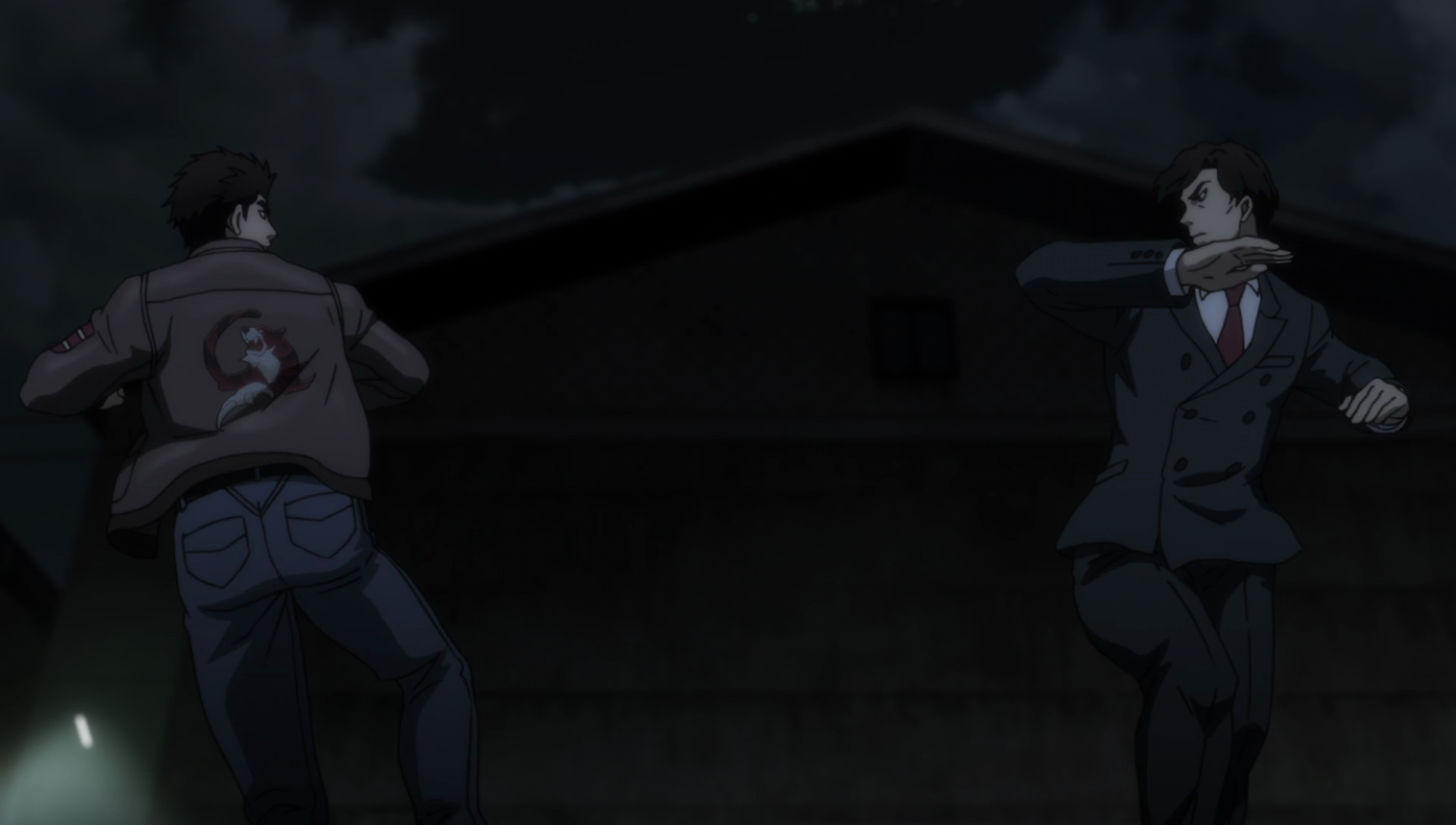 Comparisons to the Game Series

Some spoilers for the first Shenmue game appear in this section.

Ticket to Hong Kong – The show has opted to skip the subplot of Ryo getting conned by Asia Travel Company out of the funds he puts down for a ticket to Hong Kong. This game plot ends when Ryo has his first encounter with Chai at the arcade, leaving Ryo broke, ticketless, and searching for a job. The show opted to introduce Chai much earlier and Ryo instead works to secure enough funds to buy a ticket from a legitimate travel agency.

Mark’s Unfriendliness – In Shenmue, Mark is rather receptive to Ryo joining his crew. He invites him to the daily forklift races to build a rapport with the other operators and even eats lunch with him. Ryo gets none of that here, where a distrustful Mark keeps him at arms length until he hears of his father’s fate.

Nozomi Escalates Her Role – She is rather passive in the games and never gets directly involved in Ryo’s dealings until kidnapped by the Mad Angels. Here, Nozomi has a lot more agency and directly tries to help Ryo on her own before getting captured. Nozomi has benefitted the most of any character so far from the changes made to her for the adaptation, and it’s easy to feel empathy for her while she deliberates leaving her life and friends behind to be closer to her parents.

Fleshing out Goro – This is another character getting more spotlight in the anime. Game Goro gets beat up and immediately shifts to being Ryo’s bro. The show actually gives us some reasons for the sudden turn toward friendship, first with the desire to hang around important people, then empathy toward Ryo’s plight.

A lot happened this week and we hit the gas toward wrapping up the plot of the first game. I felt particularly impressed with how the action sequences were animated this week. The fight with Guizhang at the end was pure eye candy. Some might quibble the fights are too short, but I prefer it that way. Real fights don’t last very long and Shenmue should always bend toward realism.

Next week is probably the last time we’ll see Yokosuka and China then is on the horizon. It’s hard not miss some of the story elements from Shenmue 1 that aren’t going to make it in, such as Megumi caring for kitten or a trip to Tomato Convenience Store. At the same time, those elements serve as world building for a game environment and don’t do much to advance the plot. Some elements have to left behind to successfully transition into a new medium. Instead we get support character building moments, particularly for Nozomi, that aren’t available to us in the games. I’m very content with this, as it continues the trend of needing to experience both the games and the anime to get a full picture of Shenmue’s rich story.

Next week is a mid-season climax with episode 5, title Equal. Catch you then for the wrap up. 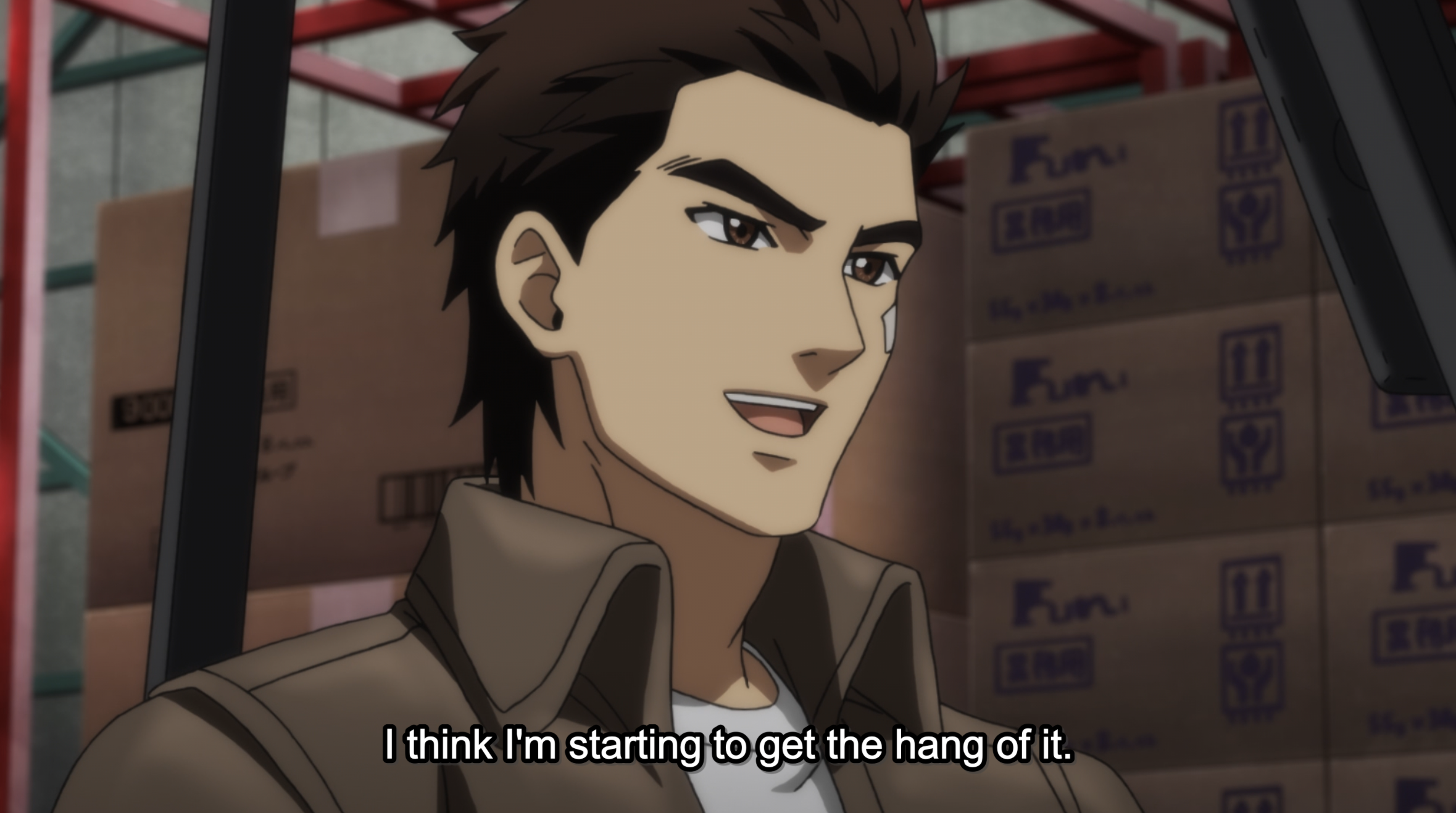