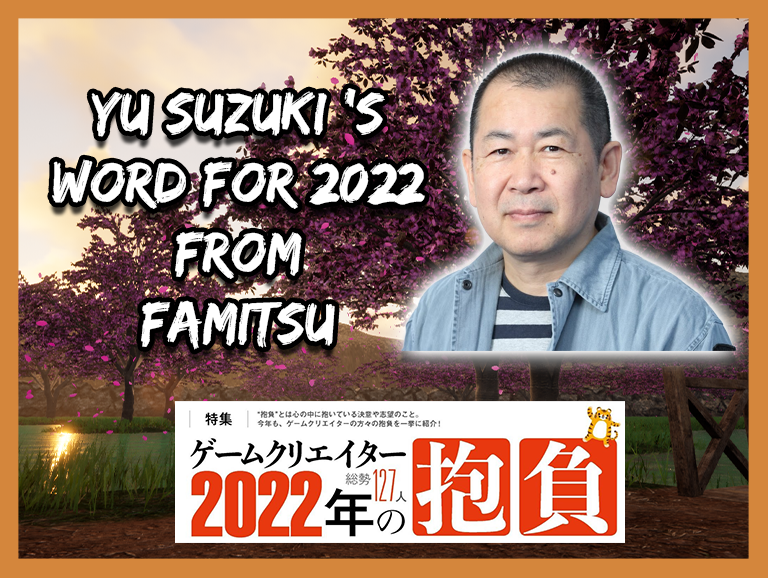 As in previous years, Japanese website Famitsu.com has released their annual survey of members of the games industry, this time interviewing a total of 127 game creators. The survey asks each to choose a word or phrase that sums up their direction for the coming year, as well as a New Year’s Resolution and goal.

This year, Yu Suzuki wraps up the survey as the very last entry in the article. Here are his responses, translated from the original Japanese:

YS: “Mix” [Suzuki uses the word borrowed from English, and also adds the English spelling of the word].
Q: Your New Year’s Resolution?

YS:
To work with people from different industries, such as movies and musicians.
I want to bring a different style to game making.
I hope to have something to announce in 2022.

YS: Unusually for me, I’ve been playing games… I can’t really have discussions with people around me unless I know at least the trends. I’ve been delighted to see so many interesting and unique games.

YS: Of course, Shenmue the Animation, scheduled for release in 2022! It will allow the world of Shenmue to be enjoyed much more conveniently than the games. Everyone will be able to enjoy it, so please look forward to it.

For the first question, Yu Suzuki replies with the word “mix”, most likely using the word from English for convenience. It seems likely this ties in to his New Year’s Resolution in his second response where he talks of working with people across different industries, with movies and music being given as examples. This harkens back to the novel approach he took with development for the original Shenmue project, as he described in a 2019 interview with IGN Japan:

“The industry didn’t have directors, or people experienced at motion capture – it was a new concept. Games didn’t have things like voiced lines or acting. So to implement it, I gathered people from various different industries: a movie person, a scriptwriter, a novelist and so on”.

Excitingly, a game-related announcement within the coming year is hinted at. Whether or not this may be Shenmue related is left open, but fans will be waiting with great interest for any news of a new game project from YS Net.

While Yu Suzuki has famously professed to rarely playing games himself during his career, last year, in a separate interview with IGN Japan, he spoke of the need to be aware of the expectations of gamers other than existing fans for development of the next Shenmue game. His next response in the survey confirms that he has been putting words into action with hands-on play to stay abreast of game releases and trends.

Finally, Yu Suzuki highlights the release of the upcoming Shenmue Anime, of which he is executive producer, in 2022.

It is looking to be a significant year for Shenmue!