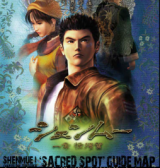 Released by the Yokosuka Action Promotion Committee, who are responsible for the tourism industry of the Yokosuka area, the Shenmue Yokosuka “Sacred Spot” guide map was released in both physical and digital form on 3rd December 2017. An English version soon followed on 19th December.

The map covers the main Dobuita Street area, highlighting various outlets which reside there, whilst comparing them to their in-game counterparts. Also covered is the road to Amihama, and the Yokosuka Harbour.

The cover featured the iconic artwork of the original Shenmue game release, and was updated to the new re-release cover in September 2018.