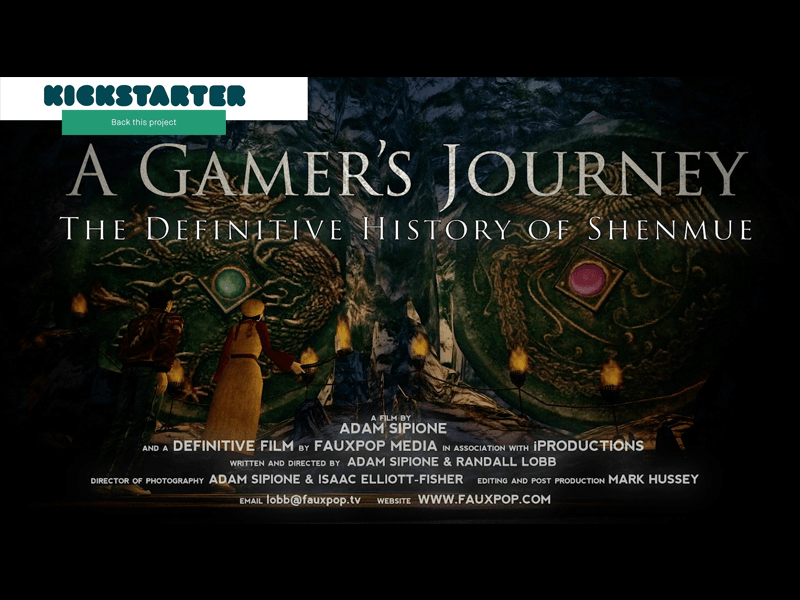 A Gamer’s Journey: The Definitive History of Shenmue, has been in production since 2015. Written and directed by fellow Shenmue fan Adam Sipione, work has been progressing on the project steadily so far. But to get over the line, they need the community’s help, and have taken the movie to Kickstarter to secure the remaining funding! You can read more about the crowdfunding campaign below.

After all these years we are finally getting Shenmue 3 plus Shenmue 1&2 HD!

….and for a few dollars more you can get your copy of an awesome documentary digging deep into the history of the franchise!

We’ll talk to the creators, fans, executives and actors who helped make it a reality. Pre-order the film now and secure your exclusive “A Gamer’s Journey” rewards. And remember, every pledge gets us closer to our goal!

We’ve put in a ton of work and have come so far but we need your help to finish the journey!

How it all started…

My name is Adam Sipione and I have been a die hard Shenmue fan since 2001 when I first played Shenmue 2 on the Xbox. I know I did it backwards but that’s a story for another time…

The idea for this film was initially conceptualized in 2014. The plan was to interview fans, a few notable Youtubers , and – if I was lucky- some of the english voice cast. I wanted to make a short documentary about Shenmue and the lasting impact it had on the people who played it. I wanted to tell the story because part of me still had faith that we would one day see a Shenmue 3. I wanted to contribute, somehow, to the possible revival of the franchise. I wanted to show the world that there are people who still care deeply about this game and it’s characters.

I reached out to a few individuals I had gotten to know in the fan community and set out to interview them with my trusty Canon C100. That got the ball rolling. Shortly after I was travelling to various cities speaking with whoever I could convince to speak with me, hemorrhaging money all the while (note: My friends and family still think I’m crazy for doing this)

A teaser was released on Youtube which garnered the attention of some industry people who were keen on participating in the film. It was all going so well, and then the unthinkable happened!

Shenmue 3 was announced during E3 2015! I couldn’t believe it. As a fan of the series I was over the moon! As a filmmaker telling the story of a long forgotten game I was worried. Had all my work been for nothing? Would this still be worth doing if we are already getting a Shenmue 3? I shared these thoughts with my friends at Fauxpop Media and Definitive Films who took interest in the project. That’s when things changed.

We went back to the drawing board. We re-shot interviews. We shot new interviews with people we never thought we would be speaking to, and…

…we established a relationship with Yu Suzuki and YsNet!!!

Having Yu-San, the father of Shenmue and someone I really admired, take an active interest in what we were doing was an amazing feeling. They wanted to assist us in telling the full story of Shenmue. I even had the opportunity to briefly visit the YsNet studio in Japan so I could formally introduce myself to Yu-San and film some behind the scenes content.

With a new boost of confidence we set to work, slowly adding to the film when we could. We took it as far as we possibly could but without a working budget things became tricky. After going over hours and hours of footage and editing what we could we reached the point where are now.

We are taking our film to Kickstarter in order to raise enough money to get a full crew of 4 to Japan so we can dive deep into the Shenmue archives and record interviews with Yu Suzuki and people who helped create the game. It we will be a long and expensive trip but we are willing to do whatever it takes to make this film everything the fans deserve it to be.

WE ARE SO CLOSE BUT WE NEED YOUR HELP!

Our team includes award-winning industry veterans known for their deep-dives into beloved pop culture properties through documentaries that have been well-reviewed by fans and critics. With this feature doc, we hope to continue the independent spirit of our previous projects, which means we need your help. But it also lets you participate and follow our progress from beginning to end!

Aside from getting a special edition copy of the movie, your support helps us get deeply Definitive – documenting the Shenmue Universe to a degree as yet unseen. If you’ve watched “Turtle Power: The Definitive History of The Teenage Mutant Ninja Turtles,” you already know how we roll – deep into in the history, pulling the best interviews, and presenting exclusive, never-before-seen items on film.

Who we want to get

….as well as many, MANY fans from the Shenmue community.

With key creators that helped make Shenmue a reality on board as participants, we will schedule our interviews, then edit, shoot some more, refine, question our sanity, geek out, shoot some more, edit, pat ourselves on the back, panic, and then finish the film – if we hit our initial goal.

We’re targeting 2019 as a finish but please bear in mind that delivery of ANY feature film can be delayed due to schedule constraints or sudden new access to people, places, or new developments in the Shenmue Universe. That would be worth the wait, don’t you think?

Our goal is to produce a 90 -100 minute documentary that does justice to the brand and, of course, the fans. Our rewards also mention BONUS CONTENT and this would be material that the filmmakers generate while making the film (that cannot be included in the 90 minute run time) but packed on your disc to enjoy forever! A 90-minute movie is the most appealing length for distributors – but if you want to see more goodies, extras, and an extended version, help us reach our stretch goals by spreading the word and telling your friends. Remember “YI” – to act without hesitation, to do what is right!

Up until now this project was entirely self funded. We shared updates when we could and made progress at our own pace. If the project is successfully funded we want to be transparent as possible as we move forward and promise to provide monthly updates at the absolute minimum.

Below is a proposed budget breakdown of how much we think everything will cost. This is based on the minimum goal of $25,000, so if more money is raised we would allocate those funds primarily to accommodation and travel, as we would be able to extend our stay in Japan and even other countries to interview as many people as we can.

We do not travel lavishly. We are simple, salt of the earth Canadians who are used to roughin’ it out. When we travel we make efficient use of our time. We would never pay extra for a VIP first class flight, but we also wouldn’t want to save $150 on a flight if it meant 3 layovers and an extra 24 hour travel time. We need our coffee strong and our bellies full but we do so within reason. Hopefully this gives you an idea of the kind of people we are.

Like every film project, there’s an element of uncertainty and things happen which can derail our Master Plan. Thankfully, we try and foresee such instances and have contingencies in place. Weather, schedule changes, tech issues, and new opportunities can appear and alter our original plan, sometimes for the best and sometimes for the worst – but we’ll keep going. Please have patience with us and know that we’re here to answer any questions, keep you in the loop, and know too that we welcome – no, we NEED your participation on this adventure.
We’re hoping to tie our release with the forthcoming game, with as many of the interviewees listed above as possible, but hitting our target date could be affected by factors beyond our control. But rest assured, we’ll do everything we can to get this documentary out in a timely manner – for our own sakes as well as for yours…

Learn about accountability on Kickstarter

Questions about this project? Check out the FAQ