Home/Shenmue 3 Kickstarter Update #25
Back to the newsfeed 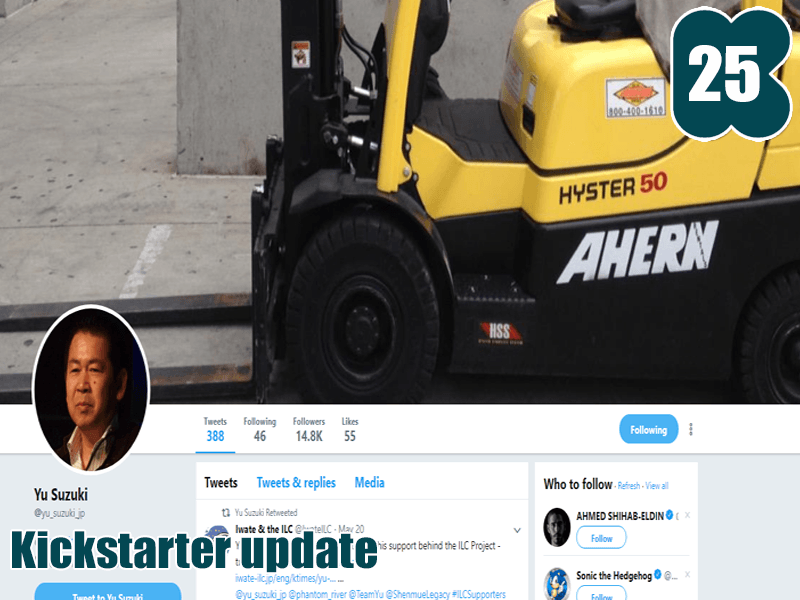 Hello Shenmue Fans throughout the World!

More I AM SHENMUE 3 Rewards have been added, timed better for Shenmue fans across across the globe. There were lots of comments from the European Shenmue community saying they woke up to find all the rewards gone. (Sorry for sneaking them in there while you were asleep!) There is still plenty of space in the Choubu boat harbor waiting area for your pictures!

If you were too busy playing Shenmue and missed the #YouaskYu Q&A during the Tweetathon, no problem, here is rundown of the all the questions that Yu Suzuki answered：  （日本語版はページの下側に！）

Q1; Were there originally 16 chapters in the Shenmue saga or were there 11? Please elaborate as to why some say 16 and some say 11. A;The detailed document I have has 11 chapters. If you include the chapters prepared for the branched storyline, it will be more than 11.

Q2; Is there any chance we can carry on Pledging after the Kickstarter date has closed? A; Thanks for the question, we will look into it.

Q3; At $5 million, exactly HOW open world will Shenmue 3 be, compared to Shenmue 1/2? A; I’m expecting something similar to Dobuita in terms of scale.

Q4; Now that we know Shenmue 3 will not end the Story, do you have a backup plan if it won´t succeed to tell the end? A; I’m going to have to think about having a successor.

Q5; Will Shenmue have online functionality for example Online arcade Highscores or Online 70 man fighting battles? A; It will be more fun, but it depends on budget, so it is still under consideration

Q6; Will you be disappointed if the Kickstarter doesn’t raise $10mill for that “open world experience”? A; No I won’t be. I am grateful that there’s another chance for a new Shenmue. I will make what I can within the budget from your money.

Q7; Will the Tiger scroll translated by Guizang in 1 be in 3? A; Great idea! I will look into it.

Q8; For Ryo Hazuki’s model and others, are you going to reuse models and general assets from Shenmue 1 and Shenmue 2? A; I don’t plan to “reuse” them, but I will use the good parts as an reference.

Q9; Why do you think Shenmue didn’t appeal to the mass audience back then? Would it need to be ‘modernized’ for today? A; There were many new challenges so that might be the reason. Even so I will do more new challenges this time. Challenge is what’s important.

Q10; Can we expect the return of lottery prize in Shenmue 3? May be the first prize can be a figure of Yu Suzuki! A; I would love to include raffles. Thanks. I will need to think about prizes that are more appealing than my figure.

Q12; Will you research latest tech in AI so you can include it in Shenmue 3 to make it a pioneering game like its predecessors? A; Yes. I would like to do challenges in terms of technology

Q13; Is there a possibility to film a production process for example motion capture or dubbing, during development of Shenmue 3? A; Yes. I want to use it to communicate the progress to you.

Q14; Will @CocaColaCo join the Party? A; I’m considering collaboration like that with real companies.

Q15; Do you have any idea if Sega’s planning on doing a Virtua Fighter 6? A; I have not heard about it from SEGA.

Q16; What can you tell me of the three blades? A; It means the jobs that use scissors, razors and knives, so barber, cook, and sewer. These are skills for jobs that have a steady need in any era.

Q17; Although a little hint is left in the video, Ryo will he now be able to jump in Shenmue 3? A; Yes. I am researching about new technology to have more natural motions in Shenmue 3

Q18; My ten year old daughter wants to know if she’ll be able to use the phone at will in Shenmue 3 like she does in Shenmue 1 A; Look forward for it. There will be many nostalgic scenes. Maybe a tin can telephone as well?

Q19; If future installments of Shenmue become a possibility will we have the option to bring over save data from 3? A; I have not decided it yet.

Q20; Can we expect epic fights like in Kowloon in Shenmue 2 and a similar battle fight system? A; There is “Battle System expanded”, in the stretch goal. Things like this will enhance the battle to make it better and more fun than Shenmue 2

Q21; Have you thought about making each future chapter after Shenmue 3 a expansion that expands the chapters one by one? A; I am not considering it at the moment.

Q22; Will we start Shenmue 3 with some items/skills/scrolls from Shenmue 1 & 2? A; The platform is different, so we can’t do it.

Q23; Should we expect any Sega related stuff in Shenmue 3 like arcade games or toy capsules? A; There is a possibility.

Q24; Were there any gameplay elements for Shenmue 1 and 2 that had to be cut due to budget constraints? A; Yes. I wanted the ramen noodles to be soggy after some time, but I couldn’t include it. I wanted to include details like that to make it real.

Q25; Will the “Shenmue Trial” be used for feedback to improve the game like Square Enix have with the FF15 demo? A; I would definitely want to get feedback, so I’m looking into how we can have such system in place.

Q26; Will everything be voice acted the same way as 1 and 2? Or will budget constraints not allow 100% voice over all the time? A; Full voicing will be possible if we have enough funding.

Q27; Would love to hear Mandarin voice acting alongside Japanese in #Shenmue3, could we make it stretch goal? A; Under consideration.

Q29; I was wondering did you get Ryo Hazuki name from Ryudo Uzaki that was a Japanese musician? A; Nope.

Q30; My question is why is not possible to use (Shenmue Passport) models for the Shenmue 3? A; I’m considering about adding some functions from Shenmue Passport.

Q31; Will there be official Kickstarter/Shenmue 3 forums to discuss and give feedback throughout the development process? A; I would definitely want to get feedback, so I’m looking into how we can have such system in place.

Q32;Can we expect custom clothing for Ryo Hazuki? It would be great feature to able to style Ryo Hazuki as we want. A; There’s a function to change Ryo’s jacket for backers pledging above $250. Customizing for other clothes are under consideration.

Q33; Why was the Dragon Mirror hidden under a cherry tree, and not a safe place like the basement? A; Iwao thought the place under Cherry blossom tree is safer.

Q34; Where did Ryo get his band aid? A; It didn’t appear in Chp.1, but there was a martial arts event, and the scar is from the final match.

Q35; What is your favorite movie? A; My favorite 3 are: The Hustler, Casablanca, Roman Holiday. I love Billiards, and I still play it sometimes.

Q36; Will Shenmue 3 be compatible with the project Morpheus VR headset for the ultimate second life experience? A; I feel that VR offers great possibilities.

Q37; Will there be a pet dog in Shenmue 3 to call, look at and feed? A; Depends on budget.

Q38; Shenmue’s core plot is basically Hamlet – are you a Shakespeare fan & has that been an influence? A; Sorry, but I have not read Hamlet. I know Hamtaro though.

Q39; What did YU name the kitten? A; I think I named her with dog names, like Pochi or Gontaro.

Q40; How was your day? A; Today is Shenmue Day, so I went to be with everyone on Twitter. Lots of people are participating, and I couldn’t be happier. The rewards went over well and completely sold out. Thank you so much!

Q41; Will we see a Shenmue soda (can be just a can) and what would it taste like? A; If there is any interested beverage firm out there, please contact Ys Net!

Q42; Will Ryo learn the value of forgiveness in Shenmue 3? A; Please play Shenmue 3 for that answer!

Q43; Do you have a rough idea how many people will be in the development team for Shenmue 3? A; That will vary depending on the Kickstarter budget.

Q44; Since relationships between characters will be more prominent, will we see something like a multiple choice conversation system? A; I am thinking about dialogue selection system

Q45; I always wondered how Ryo, being Japanese, could communicate so easy in China. Can Ryo speak Chinese? A; That’s a touchy subject…let’s not touch it shall we?

Q46; Can you confirm that guns will never be a part of Shenmue gameplay, not for Ryo or any other playable character? A; I am not thinking about including guns as a weapon at the moment.

Q47; Will Ryo finally eat and have other bodily functions? A; I don’t have any plans for implementing that in Shenmue 3.

Q48; Why does Ryo have a Saturn under his TV in Shenmue 1 but no games? Was Iwao using the promise of a game to keep Ryo focused? A; That sounds about right. Let’s go with that.

Q49; Mr. Suzuki, what is your favorite kind of music? A; I like Jazz and Rock.

Q50; Why does Iwao Hazuki love carrots so much? A; Yes! Iwao’s most favorite food is carrots! *jokingly*

Q51; Suzuki-san, can you please tell us some little info about Shenhua that the fans don’t already know yet? A; The Shenmue tree’s flower is named Shenhua. She is named after that flower.