Español
Home/Shenmue Dojo Turns 20: Interview with Andy Bandos.
Back to the newsfeed 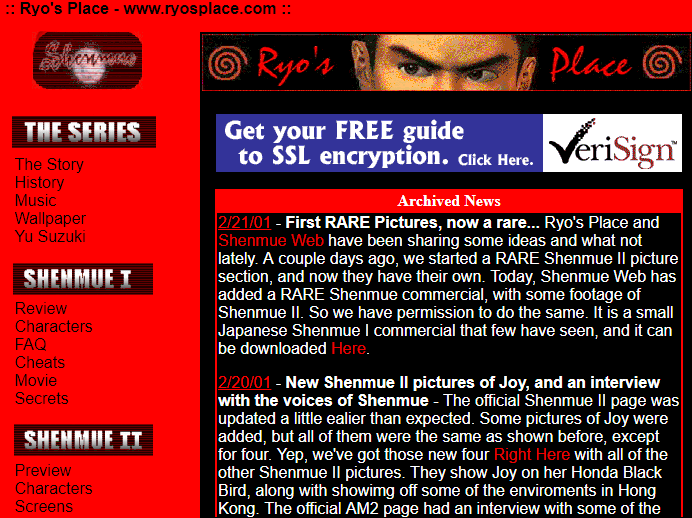 As part of the Shenmue Dojo’s 20th Birthday celebrations we have been able to secure a number of interviews with people who have played a key role in the history of the Dojo and the Shenmue franchise. Therefore there’s no better place to start than an interview with the man that started it all! Andy Bandos.

When the Dreamcast was released in 1999 I was an average teenager gamer.  I was attracted to the Dreamcast since it was the cool, new thing of the day.  I had a Sega Genesis when I was younger, but it’s not as though I was a Sega fanboy.  I just wanted to play with the latest technology.  I was immediately interested in games such as Sonic Adventure, Skies of Arcadia and Shenmue.

I think I was originally drawn to Shenmue since it offered a massive virtual world to explore.  The graphics and depth of the game captured my imagination.  The story line was engaging, but I loved the freedom the game offered.  Being able to go anywhere and talk to anyone was unique at the time.

What attracted you to Shenmue first off? How did you discover the game?

I think I was originally drawn to Shenmue since it offered a massive virtual world to explore.  The graphics and depth of the game captured my imagination.  The story line was engaging, but I loved the freedom the game offered.  Being able to go anywhere and talk to anyone was unique at the time.

I actually got to preview Shenmue before it came out in the States by being a part of a consumer test study.  I responded to an advertisement in a newspaper seeking people ages 13-18 to test a few Dreamcast games.  I went to a product testing location in Chicago, IL and got to play some short beta versions of upcoming Dreamcast games.  We would then be asked to answer some survey questions in a discussion panel.  I remember walking around Ryo’s neighbourhood and house and just being in awe.  This was like no game I’ve ever played.  I wanted to learn more about this game but realized there was not much online information yet.  Ryo’s Place was born shortly after. 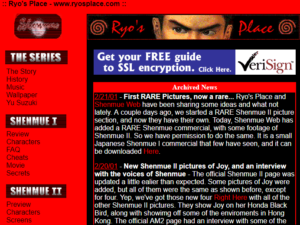 What was the inspiration behind the creation of “Ryo’s place” & later on the “Shenmue Dojo”? What challenges did you face in getting the site up and running? Would it be easier to do this today, given the tools available?

I had very basic HTML experience before working on this website.  Ryo’s Place became the catalyst for me to learn to code and begin graphic design.  The internet was a very different place 20 years ago, so finding tools to do this was not as easy as it would be today.  Some logos were originally edited in Microsoft Paint.

After you left the Dojo in the hands of the new owner. What did you move onto next?

After about 5 years of obsession towards Shenmue Dojo, I went away to College and had less time to work on it.  At the same time, there was not much new information happening in the Shenmue world.  Shenmue III seemed like a pipedream.  I became busy with life and moved on to other interests.  I just naturally started to drift away.  When I came back home from college for the holidays I found out that my little brother pawned my Dreamcast and PS2.  These were the last video game consoles I ever owned.

Did you, when you started this site, imagine the impact it would have 20 years on? Are you surprised that things are still running today?

The fact that Shenmue Dojo is still around today is mind blowing to me.  I created it as a hobby project when I was 13.  It was fun.  It was a way for me to stay busy and learn new skills.  I also found an amazing global community. I’m grateful for all the great people I met and helped me along the way.  A few of them I actually met in real life.  I’m glad to know that this little hobby project of mine has brought together so many like-minded people from around the world. 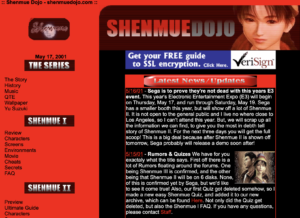 First use of the Shenmue Dojo name

Did you, as time passed, still follow Shenmue news/the fan campaigns for Shenmue III to be made? When the Shenmue III announcement was made what was your reaction? Did you think it would ever happen? If you have played Shenmue III what did you think of the game? (answered together).

As I mentioned before, I’ve moved on from my gaming past.  Once or twice a year I would look back at news in the Shenmue world.  I was very surprised that Shenmue III came to fruition.  It’s amazing that fans never gave up.  I’ve watched videos of it and read some reviews, but I have not played it.  I have so many great memories of Shenmue when I was younger, but I don’t feel that same way about it now.  When Shenmue II came out I felt I HAD to play it.  Now I don’t have that same feeling.  There are other things in my life that make me happy and satisfied. 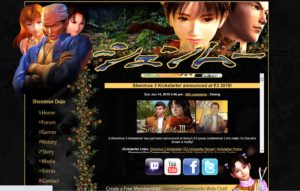 What are your thoughts on the Shenmue Dojo today? Do you have any future hopes for it?

I think Shenmue Dojo is a great resource for the fans out there.  The website has expanded and evolved so much from when I originally started.  The amount of information on it is impressive.  Even though I don’t have the same love for Shenmue as I once did, I’m very happy that other people have taken my original dream and expanded it into something very special.  I can see this website growing and evolving for years to come. 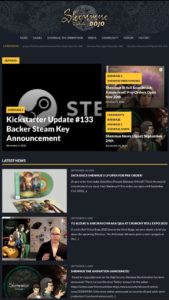 20 years have passed since the creation of Ryo’s place/Shenmue Dojo. What are you doing now? Do you still follow gaming as a whole? Have you moved onto other interests?

I currently live in Denver, CO.  I’m happily married.  I teach High School science.  In my free time now I enjoy rock climbing, backcountry skiing and trail running. I’ve actually travelled all over the world to pursue my passions.   I’ve skied in Japan and wanted to ask locals if they saw a man in a black car drive really fast that day it snowed.  My life is much different than during my time with Shenmue Dojo.  I think creating Ryo’s Place during my formative years helped me grow as a person and I am happy for that experience.