Español
Home/Episode Recap – Shemmue The Animation S01E06: ‘Dignified’
Back to the newsfeed 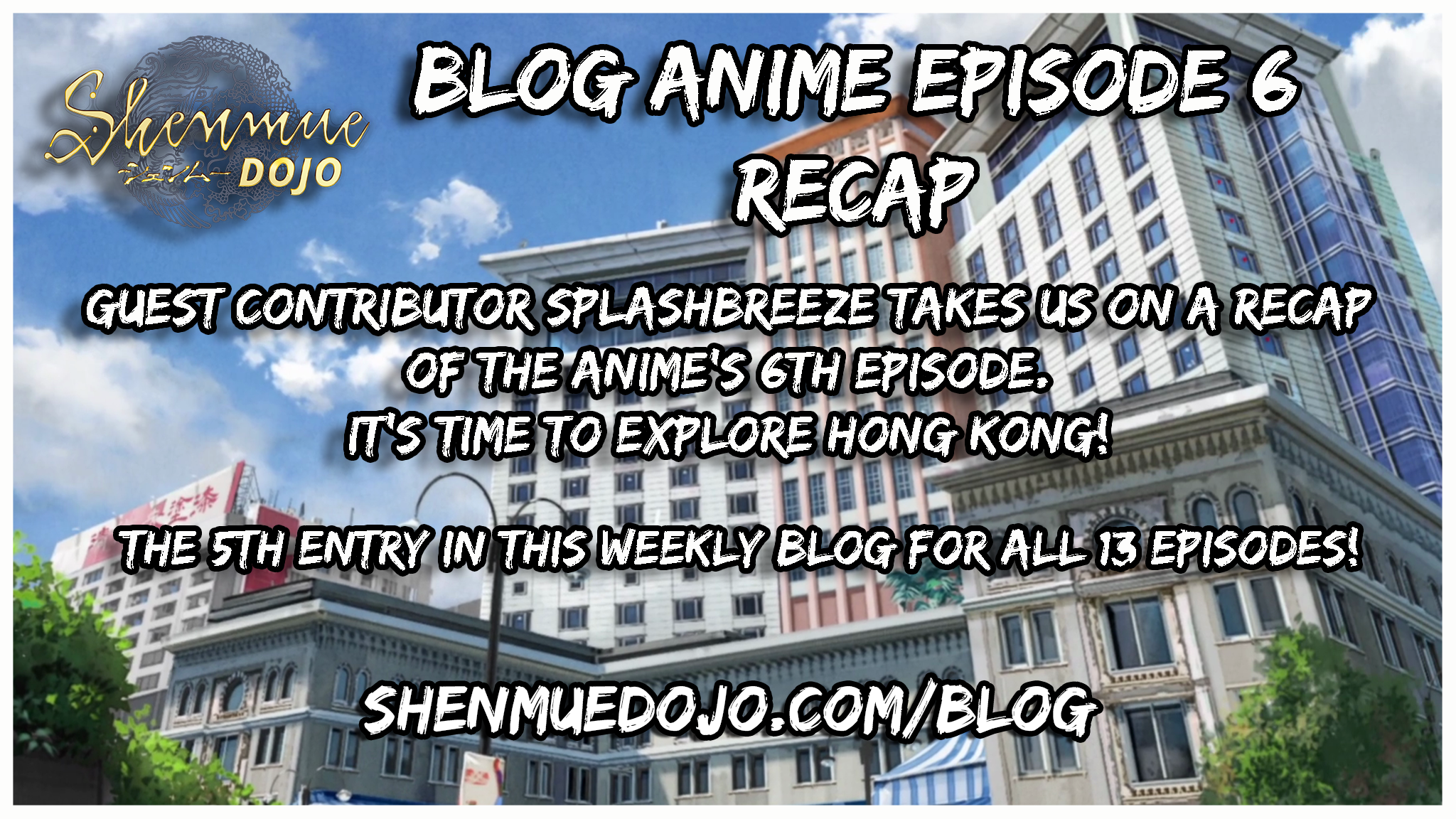 This week gave us an exciting introduction to 1980s Hong Kong and a brand new cast of characters. Here’s the recap of Dignified. 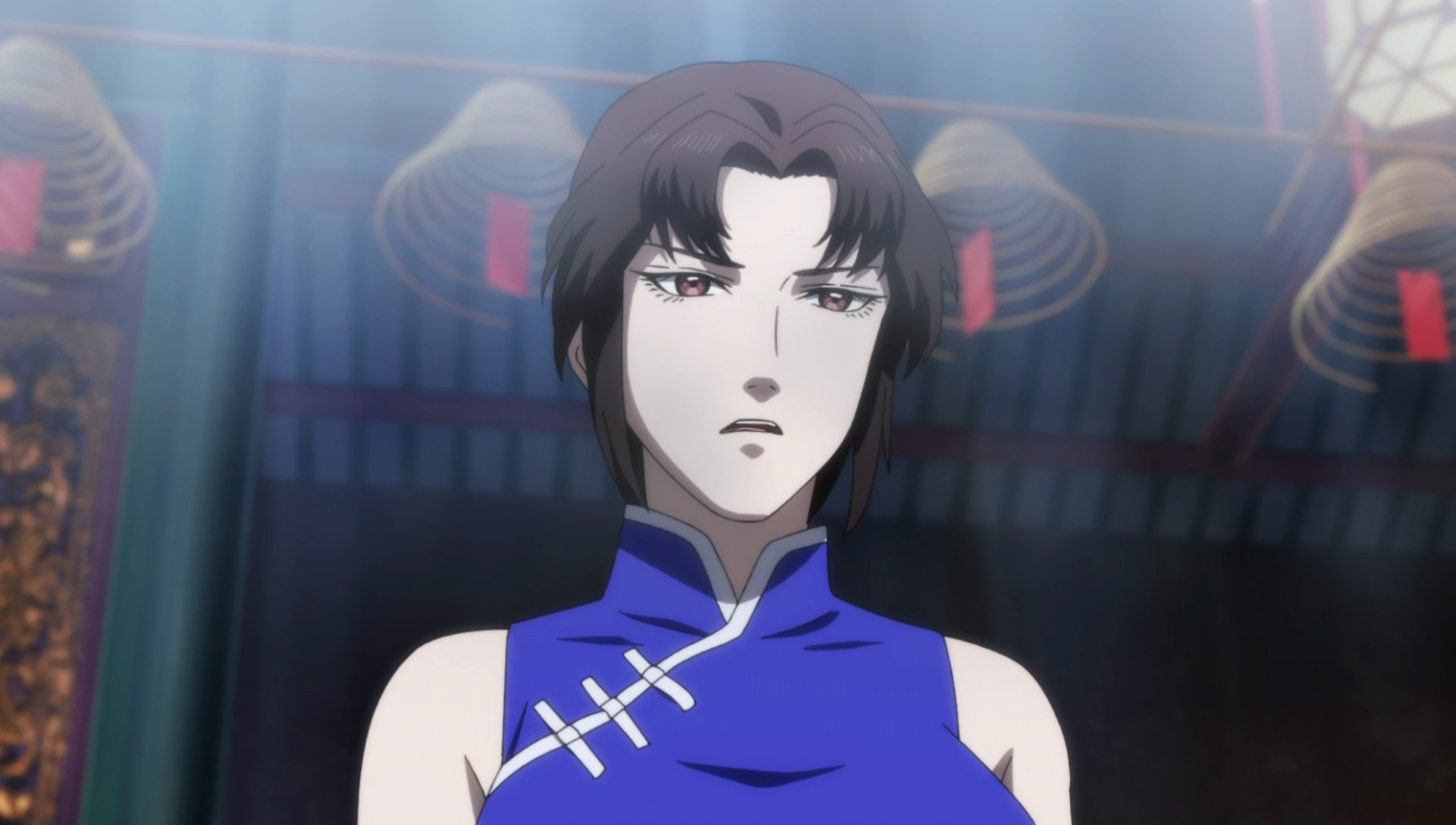 A Fish Out of Water

Ryo disembarks the ship from Yokosuka and is immediately overwhelmed by the bustle of this massive city. He’s nearly run over by brash redheaded biker named Joy after failing to get out of her way. The two engage in an angry back and forth before Joy notices he’s a tourist and softens a bit. She lets him know Hong Kong is a fast moving town and Ryo will need to keep pace before riding off with a passing warning to watch out for pickpockets.

As Ryo makes his way down the streets of Aberdeen trying to find his way to Lishao Tao’s residence, he’s approached by a boy pleading help as three gang members threaten him. Remarking that thugs seems to appear no matter where he goes, Ryo drops his travel bag to the ground and prepares to take them out but is shocked to find out the whole scenario was a setup. His bag is stolen by the boy, Wong, and the four thieves run off before Ryo can catch them. While flustered by the robbery, Ryo was fortunately carrying his most important items, the Phoenix Mirror, money, and the introduction letter for Master Tao on his person, so the police advise him to find a place to stay and contact them later.

Ryo looks for lodging but can’t find a vacancy. At the same time he also asks around for guidance toward the Yan Tin apartments where Master Tao lives, and ends up coming across an elderly man practicing Tai Chi in the South Carmain Quarter. The man is eager for a sparring match with the young martial artist. After being persuaded to use his full fighting force, Ryo is shocked to find the old man get the best of him using his soft Tai Chi forms to counter. 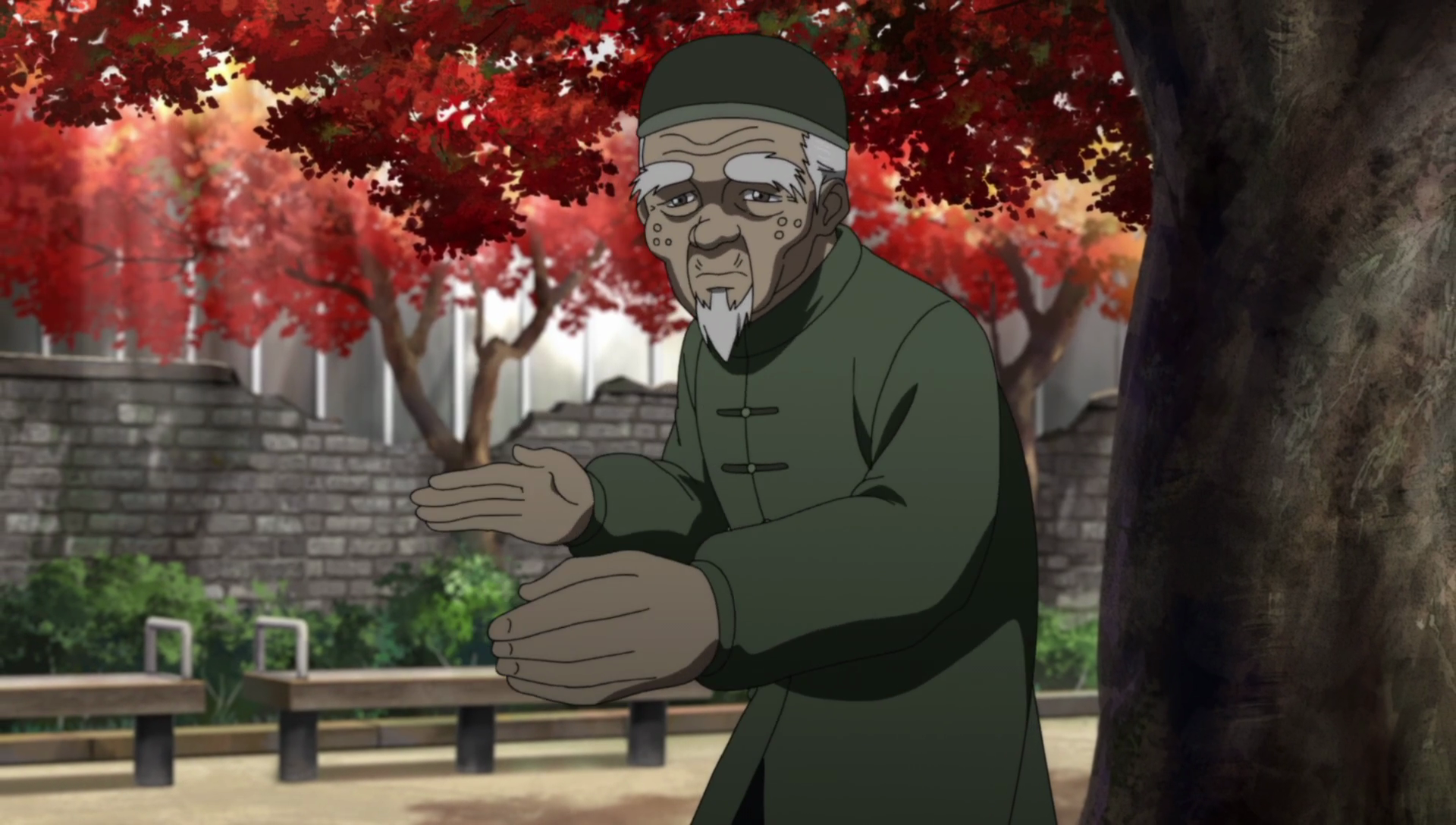 At the Yan Tin apartment building, Ryo is confronted by an elderly woman mistaking him for a land shark there to drive her out. Noticing the guidebook in his hand, she recognizes him as a tourist tells him that Lishao Tao doesn’t live there any longer. She directs him to visit Man Mo Temple after Ryo persists, seemingly aware that he’ll not get the quick meeting he impatiently seeks.

Entering the extravagant temple, Ryo comes upon a woman and seems almost stunned by her as she turns around to meet his eyes. After regaining composure he asks about Lishao Tao, specifically referring to the master as a man. The distinguished woman says she’s only there to pray and exits, as a monk working at the temple inquires about his desire to meet the master. His introduction letter from Master Chen is not sufficient and Ryo’s advised to wait patiently for the meeting to fall into place. In the temple courtyard, Ryo finds the woman again. They have a brief conversation that turns tense. She is there to pray for an unspoken wish, one she’s hoped for many years to become a reality, and senses Ryo has a wish too. She observes from his eyes that his desire is consuming him and blinding him to what is right in front of him, then exits the temple. 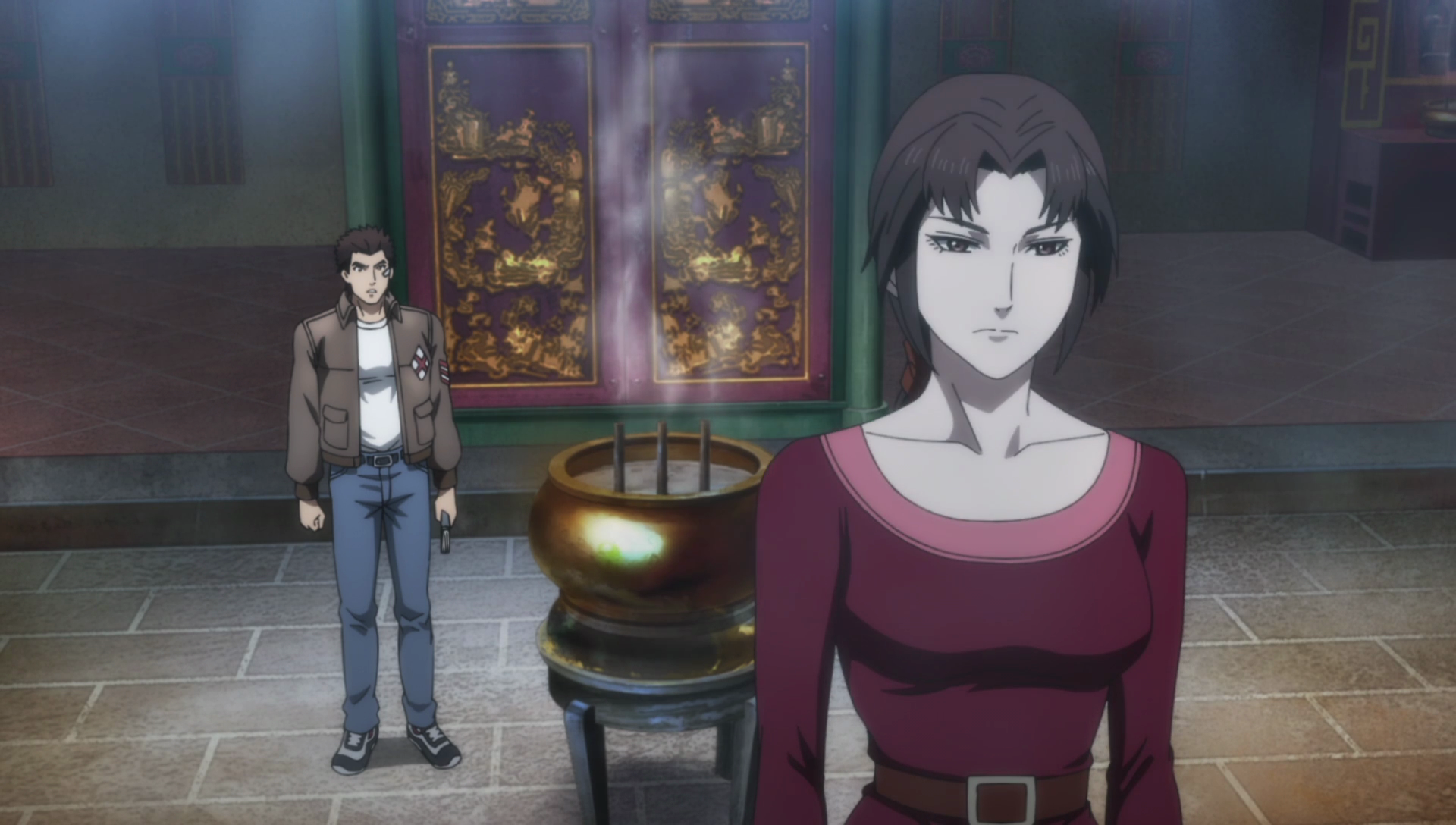 Ryo returns to the elderly Tai Chi practitioner, Jianmin, at Lotus Park for help. He knows Master Tao and offers a hint on the condition that Ryo use the Iron Palm technique he was just shown on the park’s tree. Only when he’s stuck the the tree hard enough to cover the ground in its red leaves will Ryo get the clue. Jianmin remarks that there are no easy Kung Fu techniques to learn in Hong Kong, likening Ryo’s impatience to wanting to learn a move equivalent to a cup of instant noodles. Accepting the reality, Ryo continues to practice with against the tree for a couple of hours.

Help from the Likes of Her

Still needing a place to stay, Ryo is headed down the streets of Aberdeen when confronted by a pair of hotheads calling themselves the Poison Brothers. A brawl is about to start when Joy breaks it up with her motorcycle and the brothers leave, not wanting to get on her bad side. She hears about his bag getting stolen but refuses to help him find Wong, the orphan boy that stole it. She heard about the unsuccessful theft from the boy earlier in the day, after Wong was visibly upset that nothing of value was in the bag. 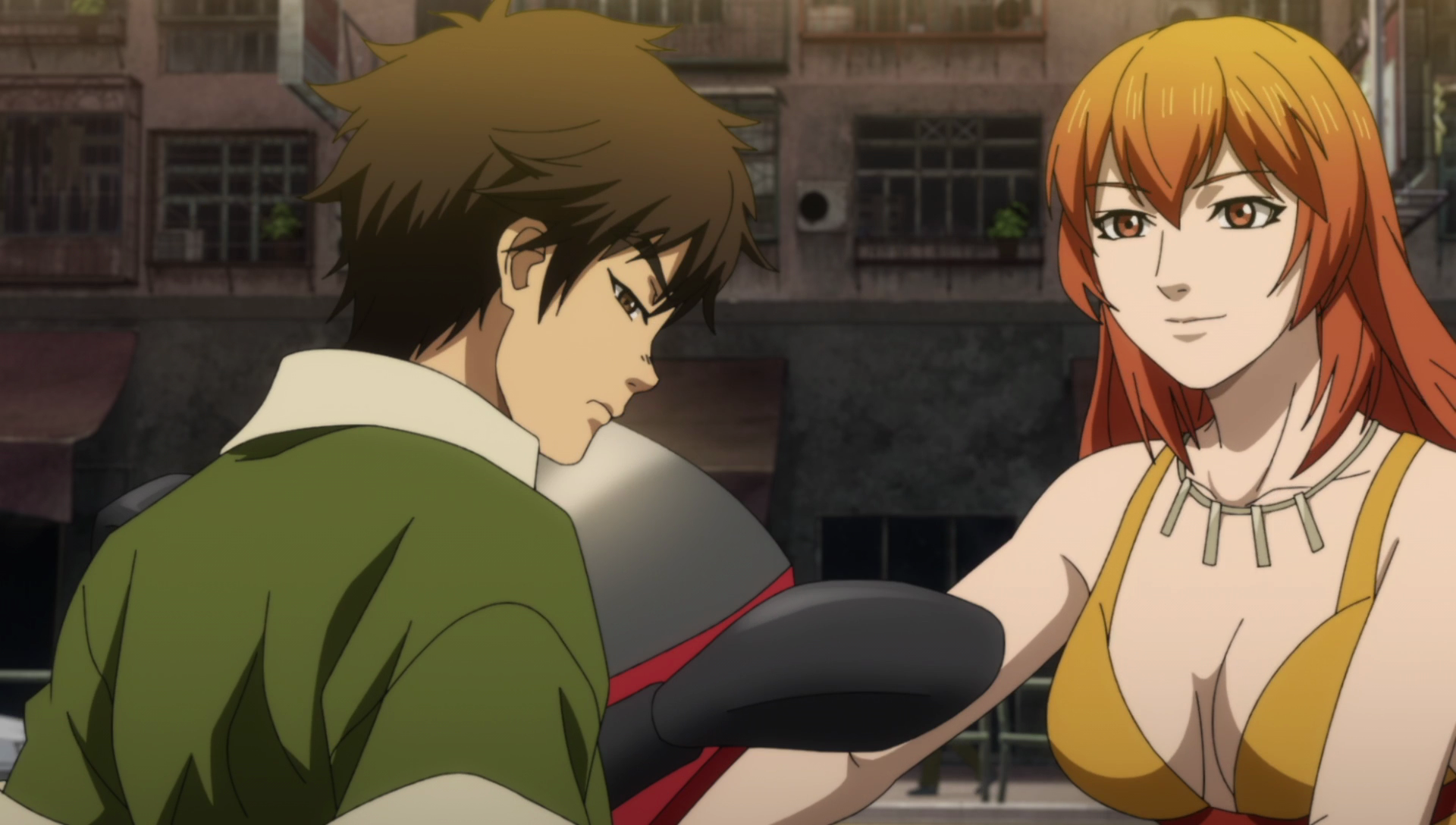 oy sees Ryo as a tough guy and won’t sell out a kid forced to run petty theft schemes just to survive. Hong Kong is a tough place and an air of uncertainty hangs over the city as they await handover back to the Chinese government. Everyone acts for themselves in the city and it’s a lesson Ryo must learn and accept if he’s to be successful on his quest here. She instead finds him a place to stay, guiding him to the Come Over Guest House. Grateful, he finally introduces himself as Ryo Hazuki from the window before she departs. Meanwhile, in Bailu Village, Shenhua is happy to see the tree outside her house is starting to bud in a subtle nod to Ryo’s arrival in China.

The next morning, Jianmin is surprised to see Ryo back at the park practicing away at the Iron Palm move, assuming he’d given up. They have a conversation about his Chen Style Tai Chi and Ryo realizes this gentle martial art can help him get his stolen bag back. Ryo returns to Joy and promises not to hurt anyone if she tells him where to find Wong.

Wong is enviously watching another boy talk to his father at Pigeon Park and flees upon seeing Ryo. A chase ensues that leads him back to the three gang members that helped with the robbery earlier. A fight breaks out, but ends with no one hurt as Ryo uses the Iron Palm to come within an inch of the gangsters faces, scaring them each of them half to death until Wong agrees to return the bag. Joy is later impressed with Ryo’s handling of the situation and intrigued by Ryo’s quest to find the truth about his father. 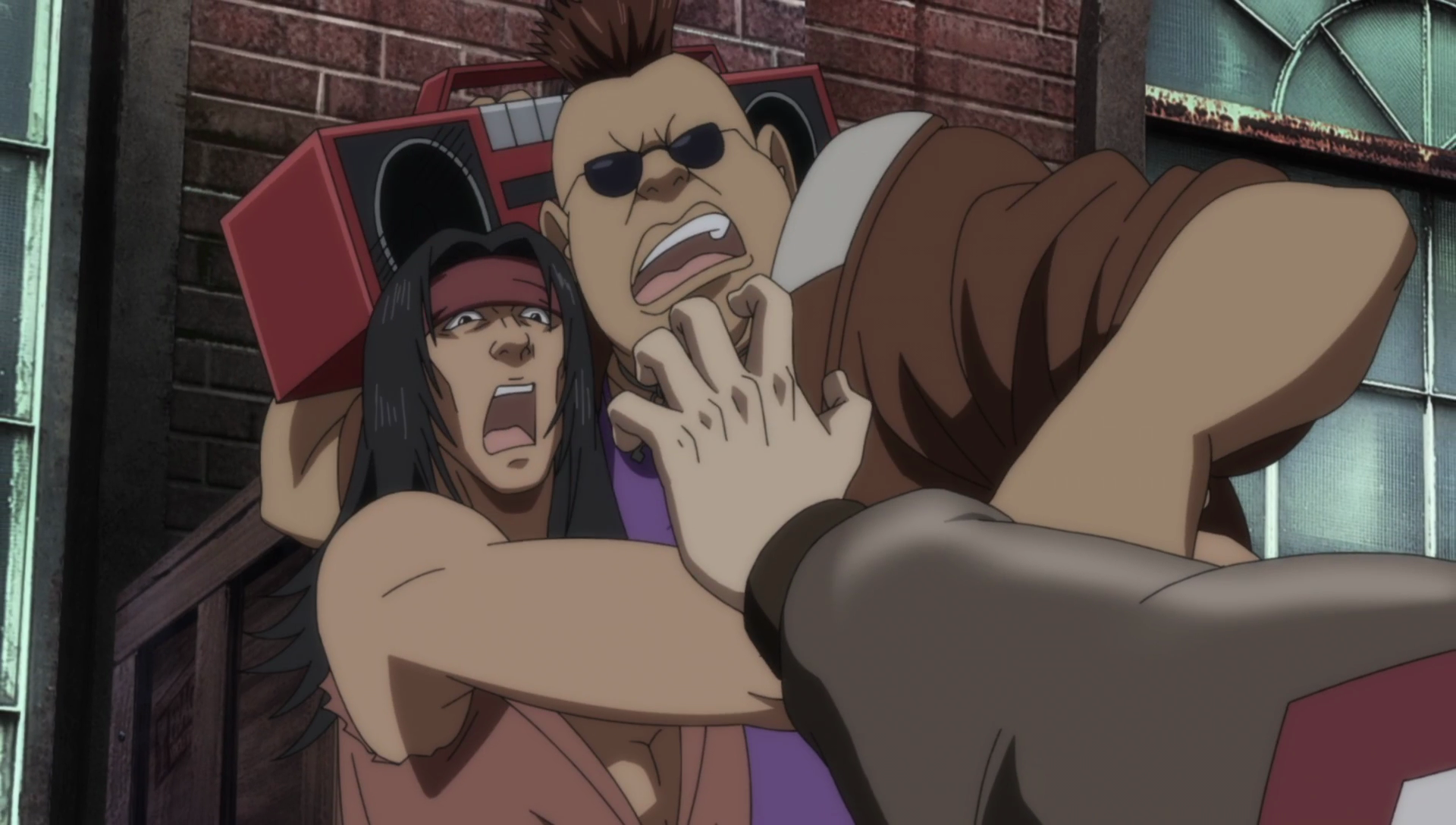 Returning once more to Jianmin, Ryo demonstrates mastery of the Iron Palm move and sends a wave of red leaves to the ground with it. The elderly martial artist informs him he has learned the first of the Wude: GON. The first Wude means to train yourself every day without neglect, and with this knowledge Jianmin assures that Lishao Tao will accept a meeting with Ryo. 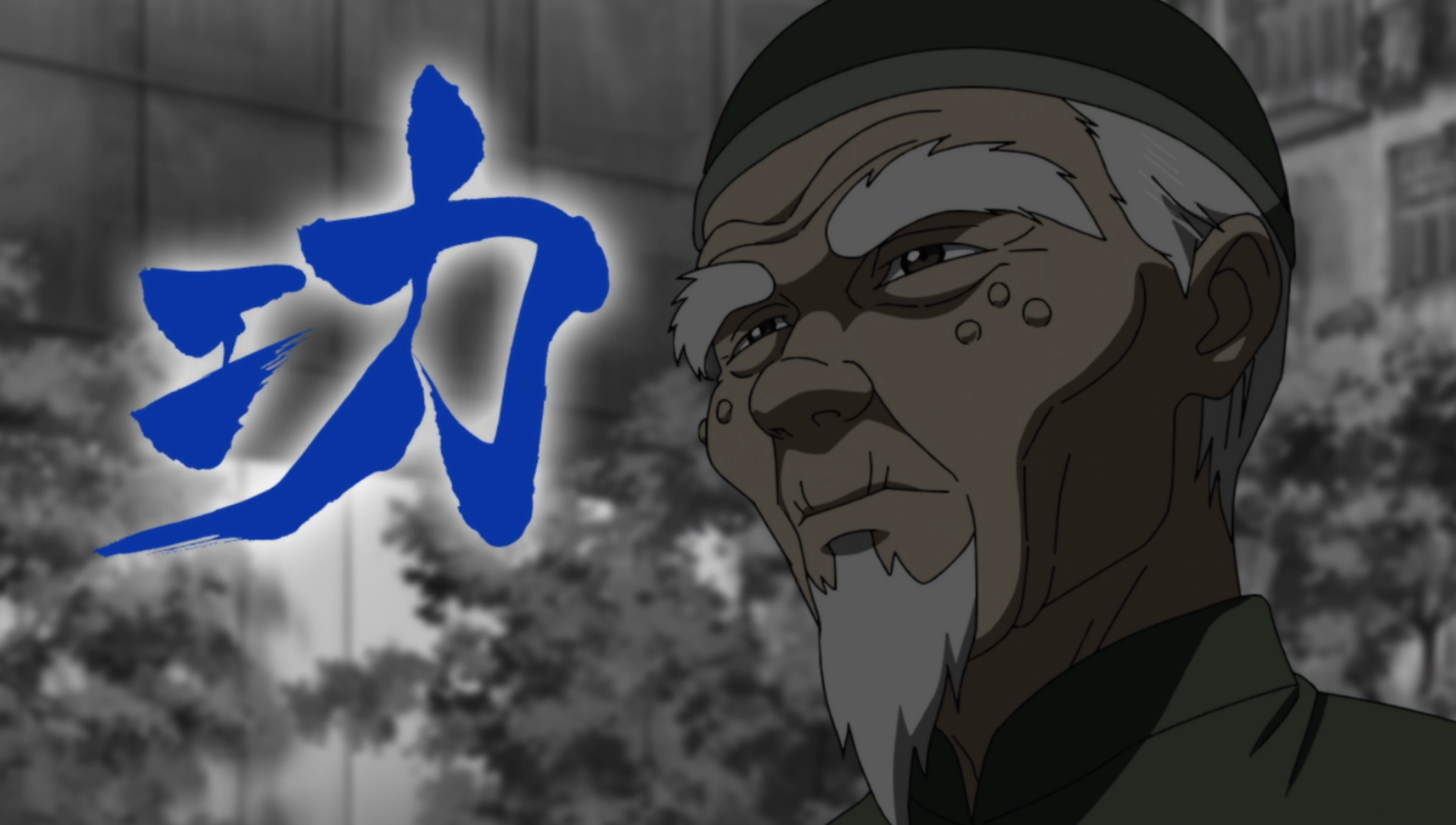 As the episode closes out at Man Mo Temple, Ryo informs the monk he will return to the temple every day until Lishao Tao agrees to the meeting, embodying the spirit of the Wude GON. He seeks Yuanda Zhu and and must learn of his location from Lishao Tao to find the truth of his father’s murder. Xiuying, the woman from earlier, approaches and challenges Ryo if this the path his father would’ve wanted him to take and says it’s leading him astray. Ryo expresses how fed up he is with her unwanted advice and rudely states she should stay out of the conversation. He’ll come to immediately regret this as Lishao Tao finally reveals herself to him. Ryo has just put himself on negative footing with the person meant to guide him forward on his quest.

Meanwhile, Wong reports the encounter with the Japanese tourist to the gang’s leader, who smirks while remarking that things are about to get interesting. 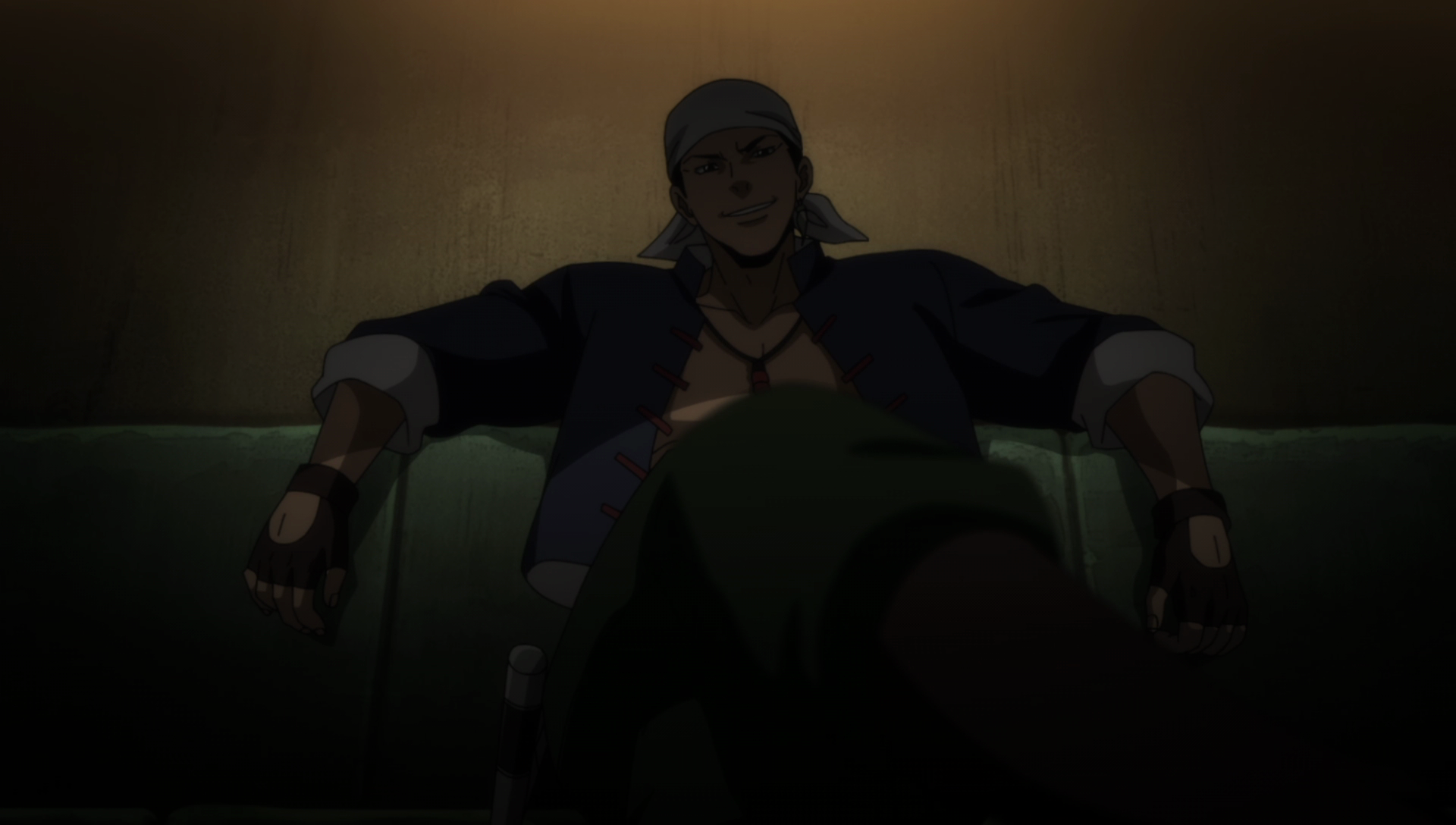 Spoilers for the game series in this section.

The Bag: To streamline the narrative and write out the need for Ryo to immediately get a job, the money and Phoenix Mirror are in Ryo’s jacket instead of the bag. He’s able to continue looking for Lishao Tao while also work on retrieving his bag.

Practical Application of Tai Chi: The show weaved Jianmin’s teaching of the Iron Palm technique into the resolution of the stolen bag problem. In the games these these two events were not seperate from each other, and Ryo’s fight with Heavens gang members Sam and Larry after chasing Wong was a straight up brawl. Nice to see disparate plot elements coming together to serve the grander narrative.

The Old Castle: We saw a brief glimpse of Lan Di sitting in the Old Caste found in Shenmue 3 during a conversation with Joy. It was a cool nod to see more content from all of the games trickle into the the show.

Just One Wude: While I expect the remaining three Wude to be learned as the Hong Kong arc continues, it was required in the game to learn all four before the meeting with Lishao Tao. In this episode, Ryo was able to just learn GON in order to push for the meeting with Xiuying.

An incredible start to the Shenmue 2 arc. For me, was the most satisfying episode of the season so far. Wong, Joy, and Xuiying got the introductions each deserved and the show did and excellent job of showing of their character traits in just one episode. It was nice to see confrontations with the Poison Brothers and Ren’s gang end without a beat down. Ryo is learning to use his abilities for more than just violent ends.

I can’t wait for next week’s episode, Future. See you then for the recap. 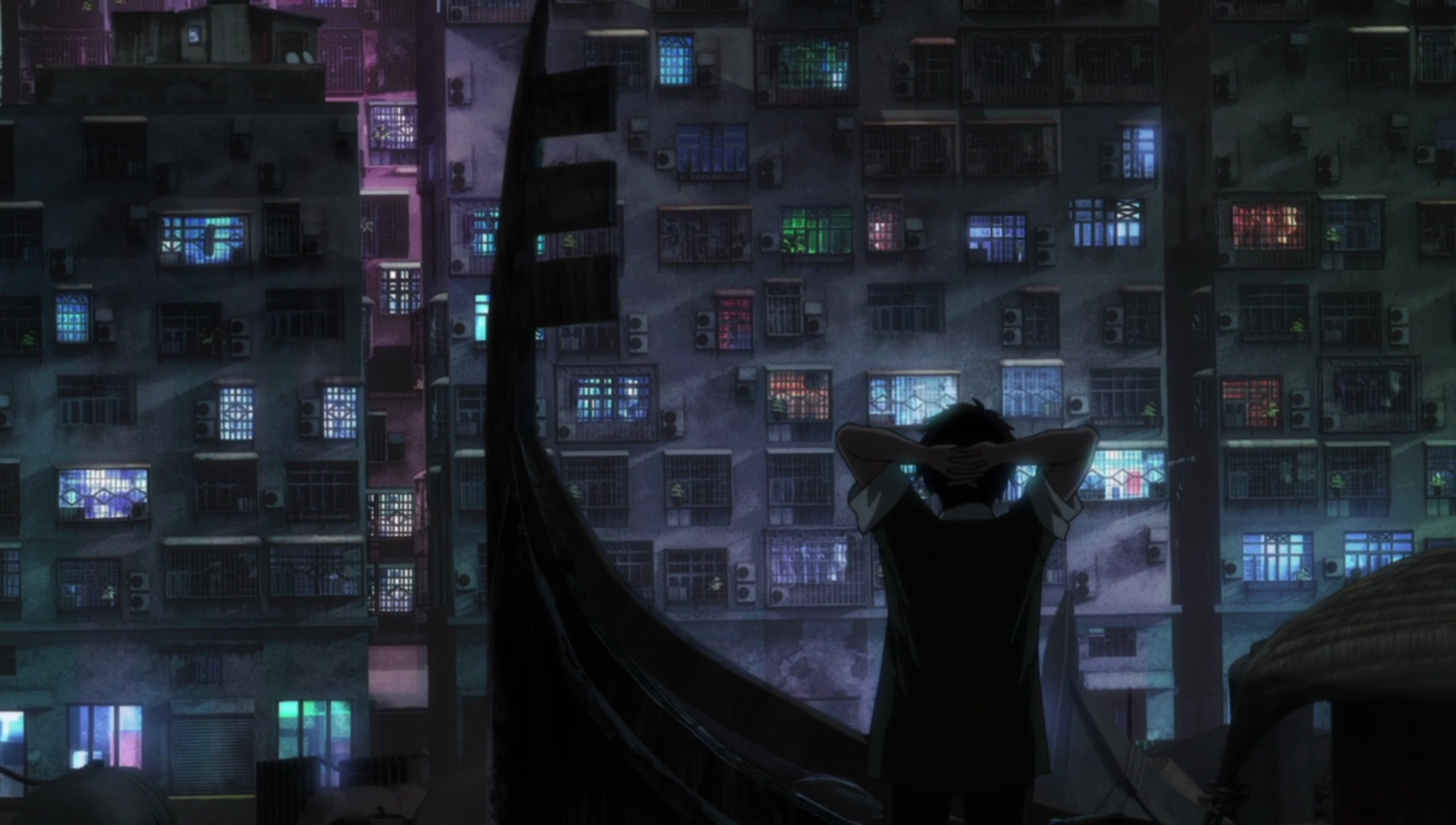