After he witnesses his father’s murder at the family dojo, Ryo dedicates his life to finding the man responsible – a mission that takes him from the streets of Yokosuka, Japan to the sprawling metropolis of Hong Kong, and beyond. Soon he’ll learn that larger, mystical forces are at play as he trains to become the ultimate martial artist in his quest for revenge.

An anime television series of Shenmue was announced on September 4, 2020 at the virtual Crunchyroll Expo. The series will be directed by Sakurai Chikara with its original video game creator Yu Suzuki serving as executive producer. It will be animated by Telecom Animation Film with production management handled by Sola Entertainment. The series will contain 13 episodes (covering all of Shenmue 1 and most of Shenmue 2) and will air English dubbed on Adult Swim’s Toonami programming block and streamed by Crunchyroll (JP Dub, English Subtitles).

After he witnesses his father’s murder at the family dojo, Ryo dedicates his life to finding the man responsible – a mission that takes him from the streets of Yokosuka, Japan to the sprawling metropolis of Hong Kong, and beyond. Soon he’ll learn that larger, mystical forces are at play as he trains to become the ultimate martial artist in his quest for revenge.

Episode 1: Thunderclap: Air Date: Feb 6th 2022
And thus the saga begins…. In Yokosuka, 1986, Ryo Hazuki the only legitimate heir of the Hazuki Dojo, spends his days training under his strict father Iwao. One day, he returns and witnesses a mysterious man called Lan Di attacking the Dojo.
Episode 2: Daybreak: Air Date: Feb 13th 2022
Hazuki Family’s maid Ine hands a letter to Ryo, who is restless from his Father’s death. The letter was sent from a person named “Yuanda Zhu” to his father which contained characters he cannot read. Ryo begins investigating the letter to find out his Father’s past. As he further investigates, he is targeted by “Mad Angels”, the gang that runs Yokosuka Harbor’s underground business.
Episode 3: Ying-Yang: Air Date: Feb 20th 2022
Ryo finally finds a person who can read Yuanda Zhu’s letter, which said “Find Master Chen for help”. Ryo finds Master Chen and asks him about Lan Di, the man who murdered his Father. Ryo learns that Lan Di is a high rank member of a Chinese underground organization “Chi You Men” and is after the two “mirrors”.
Episode 4: Shackles: Air Date: Feb 27th 2022
To chase Lan Di, Ryo decides to go to Hong Kong, but realizes he does not have enough money to go. With Goro’s assistance Ryo gets a part-time job, which he soon learns is in Mad Angel’s territory. To seek information on Lan Di, Ryo approaches Mad Angels…
Episode 5: Equal: Air Date: March 6th 2022
Ryo is forced to fight Guizhang Chen from Chen Family, to save Nozomi who Mad Angels have taken as a hostage. In hopes that Goro finds Ryo’s secret message, he fights Guizhang Chen. The fight ends with Ryo and Guizhang both getting wounded and defeated. When Goro has all but given up hope…..
Episode 6: Dignified: Air Date: March 13th 2022
To unveil the truth behind his Father’s death, Ryo heads to Hong Kong. Ryo looks for a person named “Lishao Tao”, but gets his bags taken by thieves. In the city of Hong Kong, many thugs and thieves walk the streets, since everyone is desperate to survive day by day. Ryo wanders the city and meets Jainmin Tao, an old man practicing Tai Chi, at a park and starts sparring with him..
Episode 7: Future: Air Date: March 20th 2022
Ryo coincidentally meets Lishao Tao, the person he was looking for. Lishao being a master of martial arts easily defeats Ryo and tells him to “go home.” Thinking he lost because he does not have enough strength, Ryo goes around Hong Kong to find a martial artist. He soon meets Zongquan Bai a street performer, but soon gets involved with Hong Kong’s underground organization “Yellow Heads”.
Episode 8: Aspiration: Air Date: March 27th 2022
Ryo is living at Xiuying Hong’s house. Xiuying ignores Ryo’s wish to meet Yuanda Zhu and keeps making him do chores for Man Mo Temple. To understand Xiuying’s notion, Ryo must learn wude, the principles of martial arts. With the help of Joy and Wong, he looks for a person who has acquired wude.
Episode 9: Distinct: Air Date: April 3rd 2022
Ryo finds a book written by Yuanda Zhu in Xiuying’s library. In the book he finds a memo of chawan sign, which could lead to danger with one mistake. Despite the danger, Ryo uses it to find Yuanda Zhu. However, instead he is attacked by members of the Yellow Heads, who are also looking for Yuanada Zhu.
Episode 10: Comeback: Air Date: April 10th 2022
To find Yuanda Zhu, Ryo follows Ren, the leader of Heavens. Gathering information from Ren’s acquaintances they reach the location where Yuanda Zhu is said to be, but they soon find out that this was Yellow Heads’ trap. Instead of Yuanda Zhu, they encounter Dou Niu the leader of the Yellow Heads. The two fight him but is unmatched by his strength and ends up being chased by the Yellow Heads.
Episode 11: Entangled: Air Date: April 17th 2022
Ryo and Ren finally find Yuanda Zhu. However, they are soon attacked by the Yellow Heads and Yuanda Zhu gets kidnapped. Ryo gets cornered but is saved by Xiuying. Xiuying was worried that Ryo would fall in to the evil course blinded by revenge. Understanding Xiuying, Ryo decides to join the underground arena affiliated with the Yellow Heads.
Episode 12: Guidepost: Air Date: April 24th 2022
Ryo and Ren successfully sneak into the Yellow Heads’ headquarters to rescue Yuanda Zhu. But the Yellow Heads all knew about their plan to sneak in. Surrounded by their enemies, the two fight Yuan who is one of the leaders of the Yellow Heads. In the meantime, Wong finds out that Ryo is in danger and break into the Yellow Head building with Joy to save them…
Episode 13: Shenmue: Air Date: May 1st 2022
Ryo finally reaches Lan Di, the man who murdered his Father. Blinded by revenge, Ryo viciously attacks Lan Di. Lan Di easily dodges Ryo’s attacks and leaves. Yellow Heads’ Dou Niu realizes his plan has failed and attacks Ryo. Can Ryo save his friends and beat Dou Niu! 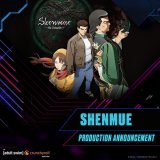 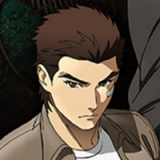 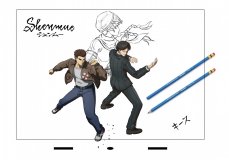