My upcoming game inspired by "shenmue" and "yakuza".

hi everyone, i hope you're all doing good. In this post i will be talking about a game i have been developing for over a year now. i dont speak english very well as you can see but i hope everyone will be able to understand me.(the game will be fully translated in English of course). the game is called "Hood story: Kaito Yamazaki" in this game you play as a young Japanese delinquent who grew up in an underprivilage area of Kamagasaki, nishinari-ku in osaka. He is the leader of a gang of delinquents in his neighborhood.

in the middle of a war between 2 rival neighborhoods of nishinari-ku, kaito wants to become a good person. but his destiny is up to the player the game will have several endings depending on the player's choice.

the game has some "shenmue" inspiration but it is mostly inspired by "yakuza" "river city ransom" and "the friends of ringo ishikawa" even if the game is somewhat different from these games.

I made a gameplay video to show some mechanics of the game, like the day night system, the open world , fighting against rivals or the arcade mini games (the game also have a weather system but infortunatly we don't see it in this video because the weathers didnt change) .

if you have any advice or suggestion I am interested and I thank you in advance.


i don't know If this kind of post is authorized here. if it's not the case then delete it and sorry.
Last edited: May 4, 2021

not a bad start for a project. You should make builds to get some free beta testing and polish it base on more direct feedback.
OP
OP

高野和泉 said:
not a bad start for a project. You should make builds to get some free beta testing and polish it base on more direct feedback.
Click to expand...

Thanks , Its a good idea , i'll probably wait until i have a little story set up in the game so beta testers will have something to play for because fighting against npc and playing mini games is not enough I suppose.
OP
OP 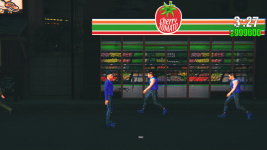 not bad. keep us posted
S

You're making excellent progress Kenzo! Keep it up!
OP
OP

高野和泉 said:
not bad. keep us posted
Click to expand...

thank you very much, yes i will post all game news here from now on.

for old news it's on this site: https://www.indiedb.com/games/hood-story-kaito-yamazaki
(sorry for my bad english)
OP
OP

Shansun95 said:
You're making excellent progress Kenzo! Keep it up!
Click to expand...

thank you so much @Shansun95 i really appreciate it.
OP
OP 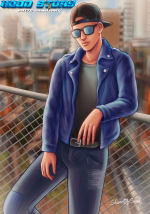 A big thanks to @SliverOfSand for this amazing drawing.
OP
OP

this trailer does not represent the final game.​

Thanks you so much @ShenSun

haven't checked on this for awhile now any new progress recently made to share?
OP
OP

高野和泉 said:
haven't checked on this for awhile now any new progress recently made to share?
Click to expand...

Yes, I have added a lot of things to the game since my last video, I will soon make a new video and I will post it here.
OP
OP

I tried a new post processing effect with new color scheme which one do you prefer? 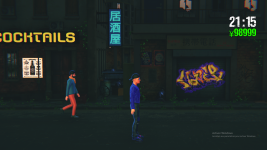 Kenzo38130 said:
I tried a new post processing effect with new color scheme which one do you prefer?

After definitely. It gives it a very unique look.

ShenSun said:
After definitely. It gives it a very unique look.

thank you very much bro, you're feedback help me a lot

lookin good. Is there any gameplay build to sample out yet?
OP
OP

高野和泉 said:
lookin good. Is there any gameplay build to sample out yet?
Click to expand...

Thank you so much , not yet but I will be doing a test build very soon, I just need to work a bit more on the optimization and the new graphics using these new post-processing effects.
OP
OP